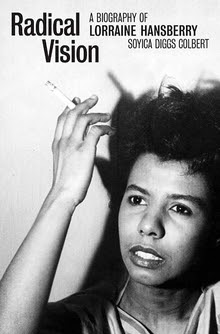 That is playwright Lorraine Hansberry in the photograph above, pictured on the cover of a recent book by Soyica Diggs Colbert. I heard about the book through a book review that was published in The New York Times on April 15, 2021, "The Brief, Brilliant and Radical Life of Lorraine Hansberry."
Hansberry, as Wikipedia tells us, and as I presume most readers of this blog posting will already know, was the first African-American female author to have a play performed on Broadway. Hansberry's best known play, A Raisin in the Sun, highlights the lives of Black Americans living under racial segregation in Chicago. Hansberry's title came from a poem by Langston Hughes, "Harlem," which first appeared in 1951:

What happens to a dream deferred?

Or does it explode?

In her book review, literary critic Parul Sehgal quotes both Simone de Beauvoir and Mariame Kaba. Sehgal argues that Hansberry, who was profoundly influenced by de Beauvoir, could not think in terms of joy or despair, "but in terms of freedom," as de Beauvoir apparently observed. Kaba, Diggs says, makes even clearer that the kind of freedom that preoccupied Hansberry was not a "destination" but a "practice, full of intervals [and] regressions."
Freedom as practice
There really isn't any other kind!
Image Credit:
https://yalebooks.yale.edu/book/9780300245707/radical-vision