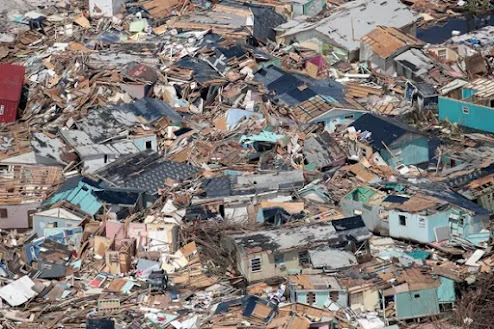 "Collapsology," though it may be a "neologism," as Wikipedia tells us, is giving us a name for a real thing. How Everything Can Collapse has certainly convinced me of that. The subtitle of that book, by the way, is "A Manual For Our Times." I recommend it!
As I wrote yesterday, when disasters strike, the monkeys of Puerto Rico can give us some guidance. However, many may bridle at the thought that we ought to be taking advice and guidance from a bunch of monkeys.
Pablo Servigne and Raphaël Stevens, the authors of How Everything Can Collapse, actually do concur that the monkeys are right, and that building broader and more tolerant social networks is exactly the right thing to do in the face of disaster. Their book, however, doesn't put this advice into the form of an admonition about what we "ought to do." Instead of a prescription, the book provides description, and says that we (like the monkeys) actually do the right thing when disasters strike, and become more cooperative and collaborative:

After a catastrophe, i.e., an event that suspends normal activities and threatens or causes serious damage to a broad community, most human beings behave in extraordinarily altruistic, calm and composed ways.... Decades of meticulous sociological research on behavior in disasters, from the bombings of World War II to floods, tornadoes, earthquakes, and storms across the continent and around the world, have demonstrated this....  The image of human beings as selfish and panic-stricken in times of disaster is not at all corroborated by the facts.... The overwhelming majority of those involved remain calm, help each other and get organized. In fact, individuals seek security first and foremost, so they're not inclined to violence and are unlikely to do wrong to their fellows. In sum, behaviour associated with competitiveness and aggression is set aside in a general upsurge of feeling where all "I's" instantly become "we's" with a force that nothing seems to stop. [pp. 150-151]

If this is a verifiable sociological and anthropological truth - and I am pretty much convinced that it is - the main problem we have right now is making sure that everyone understands that the disaster is present, that it has already occurred - that the crisis is NOW.
Perhaps the pandemic, with which we still grapple, may help us to understand.
Ojalá!
Until that news does come down the wire, and the message gets through, Servigne and Stevens leave us with some words from Gary Snyder. I will do just the same:

The rising hills, the slopes,
of statistics
lie before us.
The steep climb of everything, going up,
up, as we all go down.

In the next century
or the one beyond that,
they say,
are valleys, pastures,
we can meet there in peace
if we make it.

To climb these coming crests
one word to you, to
you and your children: