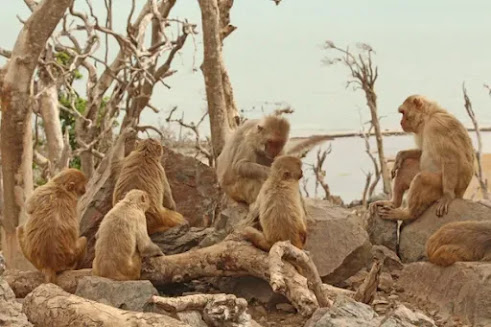 Writing in Scientific American on April 8, 2021, Lydia Denworth lets us know "What Monkeys Can Teach Humans about Resilience after Disaster." Here's a quick summary of her very interesting article:

In September 2017, when Hurricane Maria hit Puerto Rico, the storm first made landfall on a small island off the main island’s eastern coast called Cayo Santiago. At the time, the fate of Cayo Santiago and its inhabitants was barely a footnote in the dramatic story of Maria, which became Puerto Rico’s worst natural disaster, killing 3,000 people and disrupting normal life for months.

But more than three years on, the unfolding recovery on the tiny island has something interesting to tell us about the critical role of social connections in fostering resilience. Santiago is home to some 1,500 rhesus macaques who have been closely observed by scientists for decades. To everyone’s surprise, nearly all the monkeys survived the storm. That made their response to the devastation of Maria, which wiped out 60 percent of the island’s vegetation, an unusual natural experiment. How would they cope? How would the competition for resources—food and shade—play out? Scientists also wondered whether the trauma of having experienced the storm might make the animals strengthen their existing bonds. Would they solely rely on their closest friends, as many humans have had to do during the COVID-19 pandemic?

The monkeys reacted by changing their social order ... The macaques built broader and more tolerant social networks, according to a paper published today in Current Biology. “It’s a wholesale shift in the level of connectedness across the population,” says neuroscientist Michael Platt of the University of Pennsylvania, who is co-senior author of the study.

Books like How Everything Can Collapse, which I have mentioned in a previous blog post, point out that continued global warming is likely to cause many major climate-related disasters in the years to come. After those disasters have hit, Denworth's article suggests, we should learn a lesson from the monkeys of Puerto Rico, and build "broader and more tolerant social networks." That may be our best chance to recover and survive.
While I think that's a good thought, I want to propose a slightly different, though definitely related, idea.
Let's not wait for the next climate disaster (the next hurricane, flood, drought, or catastrophic wildfire). Let's recognize that the "next disaster" is already here. Continuing global warming is a current disaster. It has already happened. It is happening right now.
If that's correct (and that's the way I see it), NOW is the time to build those "broader and more tolerant social networks." We don't have to wait around for any more floods, hurricanes, wildfires, and droughts. The crisis of global warming is a disaster that has already arrived. Since it is here now, NOW is the time to leave our individualism, tribalism, and political polarization behind.
Building broader and more tolerant social networks is exactly what we need to do - and we do need to do it now.
NOW is the time we need to start "monkeying around."
Image Credit:
https://www.scientificamerican.com/article/what-monkeys-can-teach-humans-about-resilience-after-disaster/