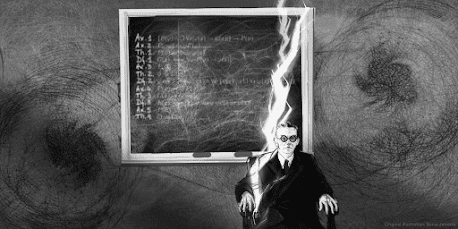 Kurt Gödel, depicted above, was a brilliant mathematician and philosopher, though quite an eccentric personality. He is perhaps best known for his "Incompleteness Theorems."
Gödel worked at Princeton, as Einstein did, and Einstein is reported to have said, in Einstein's later years, that Einstein's own work didn't mean very much to him anymore and that "he mainly came to the institute to have the privilege of walking home with Gödel.”
I know little of Gödel, but did run across him, recently, by way of an article in the March 22, 2021, edition of The New Yorker. In that article, "When Constitutions Took Over The World," Jill Lepore, who is a history professor at Harvard, told a long and involved story about how Gödel had come to study our Constitution with great care. He did so in order to pass a test to become a citizen of the United States, and Gödel's study convinced him that there was an inner contradiction, a logical flaw, and that "he could show how in a perfectly legal manner it would be possible for somebody to become a dictator and set up a Fascist regime, never intended by those who drew up the Constitution.”
According to Lepore, the judge who presided over Gödel's citizenship hearing refused to let him explain just how that would be done, and that since neither Gödel nor his friends ever explained the theory, it has since come to be called "Gödel’s Loophole." As Lepore reports, "for some people, conjecturing about Gödel’s Loophole is as alluring as conjecturing about Fermat’s Last Theorem."
In fact, Lepore does solve the problem - or at least she thinks she has the answer:

Gödel’s Loophole really isn’t anything like Fermat’s Last Theorem, because constitutional scholars are pretty sure of what Gödel had in mind. It’s a constitutional version of the idea that, if a genie wafts out of an oil lamp and offers you three wishes, you should begin by wishing for more wishes. In what amounts to a genuine oversight, Article V, the amendment provision, does not prohibit amending Article V. It’s very hard to ratify a constitutional amendment, but if a President could amass enough power and accrue enough blindly loyal followers he could get an amendment ratified that revised the mechanism of amendment itself. If a revised Article V made it possible for a President to amend the Constitution by fiat (e.g., “The President, whenever he shall deem it necessary, shall make amendments to this Constitution, which shall be valid to all intents and purposes, as part of this Constitution”), he could turn a democracy into a dictatorship without ever having done anything unconstitutional.

As Lepore wryly ends her article, thinking, no doubt, about our 45th President, "What Gödel did not realize is that it’s actually a lot easier than that."
oooOOOooo
Responding to Lepore, Benjy Weinberger, of San Francisco, sent the following letter to the magazine, which then printed it in its April 19, 2021 edition: 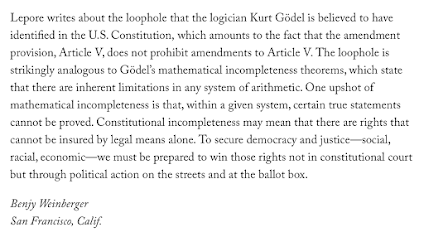 I think that Weinberger's observation is worth repeating. He is right:

Constitutional incompleteness may mean that there are rights that cannot be insured by legal means alone. To secure democracy and justice - social, racial, economic - we must be prepared to win those rights not in constitutional court but through political action on the streets and at the ballot box.