#98 / The Failure Of Our Legislative Will 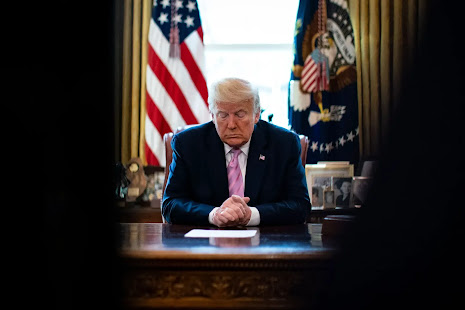 This photo of a prayerful former president, as he is pictured above, illustrates a March 13, 2021 article in the The New Yorker. Corey Robin, who is an American political theorist, and a professor of political science at Brooklyn College, headlines his article on the current status of our democracy this way: "Trump And The Trapped Country." Robin is writing more about us, we of the "trapped country," than about our former chief executive, although Robin's acknowledgment of Trump's totalitarian and tyrannical tendencies does open the discussion:

The attack on the Capitol was the latest, and most significant, data point supporting the claim that Trump has practiced strongman politics, variously described as authoritarian, fascist, or tyrannical. The strongman thesis was supposed to capture something novel on the right: not its cruelty or racism, which had long been observed by scholars and journalists, but its potential to end democracy itself. For many liberals and leftists, Trump threatened the people’s power to determine their future. While this idea provoked much debate during the Trump years, January 6th seemed to settle it. Even the sharpest critics of the thesis were shaken from their skepticism.

Robin quickly moves on, however. He suggests that the most important challenge to our democracy is not from the tyrannical tendencies of a Donald J. Trump - or from anyone else with a similar "strongman" approach to government:

If the fear behind the strongman thesis was the eclipse of democracy, we still have reason for concern—less because of a tyrant looming on the right than because of a paralysis of political agency across the board. The signal quality of Trump’s Presidency was not how unusual it was but how emblematic it was. In all likelihood, the first two years of the Biden Administration will see little transformative legislation and a lot of executive orders. (The stimulus bill may augur fundamental changes down the road, but its most redistributive provisions are temporary and will face major challenges upon their expiration.) [The Biden Administration will] look, in other words, like Trump’s Presidency and all but the first two years of Obama’s. It will mark twelve years of an era in which the call of the voters is answered by the palsy of our institutions (emphasis added).

By identifying our governmental institutions as "palsied," Robin is shifting the focus from the actions and intentions of our chief executive - Trump, Obama, Biden, or anyone else - and is reminding us of something Shakespeare told us, as Brutus and Cassius talked about that original and model "strongman," Julius Caesar:

The fault, dear Brutus, is not in our stars, But in ourselves, that we are underlings.

Robin's analysis is worth reading in its entirety. He stresses the conundrum that has the Constitution playing "both sides," bringing us to political stasis:

We are not witnesses to Prometheus unbound. We are seeing the sufferings of Sisyphus, forever rolling his rock—immigration reform, new infrastructure, green jobs—up a hill. It’s no wonder everyone saw an authoritarian at the top of that hill. When no one can act, any performance of power, no matter how empty, can seem real.

To my mind, the key phrase in this interesting article is Robin's statement that our focus on the executive "masks the failure of legislative will."
We, the people, are not "underlings" in our democratic republic. We are in charge. But if we expect our government to generate the results we desire we must recognize our governing role and the power that goes with it. If we fail to exercise our political power, and fail to assert our "legislative will," if we wait for someone else, some president (Obama, Trump, Biden, or the next one) to do what we, the majority, wish to have done, our democracy will wither away in its desuetude.
To make our democracy work, we must redirect our energies. We must cut back on our dedication to entertaining ourselves and put a priority on governing ourselves. The role of citizen, not consumer, must be the center of our life and action. We must insist that our political institutions actually accomplish what we, the majority, want. Such an insistence that our government actually do what we want can be realized only by never forgetting the obvious requirement for all those who prize self-government:

If we want democracy and self-government, we must be willing to get involved ourselves.