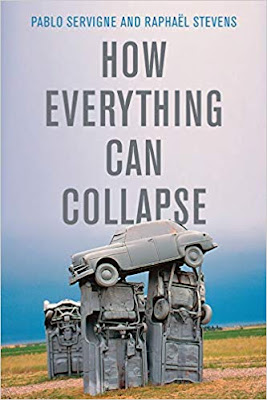 My friend and neighbor Michael Urban is an emeritus professor of political science at the University of California, Santa Cruz. One day, a month or so ago, when I returned home from one of those "social distancing" walks that have helped me bolster both my physical and mental health during these pandemic times, I found a copy of the book shown above.

The book had been left for me by Michael, who properly guessed that I would find it interesting. As it turned out, I found it more than interesting. I found it compelling! I am continuing to think and reflect on what the authors contend.

Near the end of the book, in Section III, which is titled "Collapsology," Servinge and Stevens ponder this question: "What place for democracy?" That is clearly a question about which I care a great deal, and I definitely have some ideas about that! However, I will not try, now, to speculate on how democracy might survive amidst the overall collapse of human civilization (which is basically the topic addressed in How Everything Can Collapse). Instead, let me make a more limited observation.

It turns out that How Everything Can Collapse discusses the very same topic that stirred such controversy when Michael Moore and Jeff Gibbs asserted, in Planet of the Humans, that wind and solar and other "renewable" energy sources are not going to help us escape from the climate catastrophe that is already in progress and that is only going to get worse.

As I mentioned in a relatively recent blog posting that discussed this film, Moore and Gibbs generated a lot of negative comment from environmentalists because their film claims that anyone who thinks that "solar will save us" are simply whistling past the graveyard.

Planet of the Humans was actually removed from YouTube because of the anguished cries from certain environmentalists that the film is "garbage." It looks like Servinge and Stevens don't agree. How Everything Can Collapse was published first in France, and the authors do not seem to have been engaged in the argument about Planet of the Humans (but maybe only because the book was written before the film was released). At any rate, here is what Everything Can Collapse has to say about the ability of "renewables" to solve our global warming problem:

As Gail Tverberg, actuary and specialist in the economics of energy, puts it, "We are being told, 'Renewables will save us,' but this is basically a lie. Wind and solar PV are just as much a part of our current fossil fuel system as any other source of electricity."

That is pretty much what Moore and Gibbs said, too, and this is not the most discouraging assertion in How Everything Can Collapse. As I say, I'm going to continue to think about (and probably write some more about) this book.

Just stand by for that. The point, today, is that we ought to be taking climate change/global warming really, really seriously. It doesn't look like there is going to be any "easy fix."