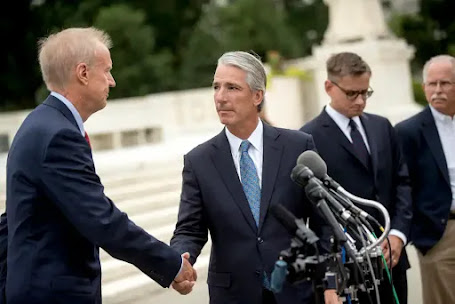 That is John Tillman, in the center of the photo above, shaking hands with former Illinois Governor Bruce Rauner outside the United States Supreme Court in 2018. Tillman, who has headed a group called the Illinois Policy Institute, is now chairman of the American Culture Project.
By the way, if you click that link for the American Culture Project, you may get an advisory like the one I got, thanks to my Firefox browser:

Firefox detected a potential security threat and did not continue to amculture.org. If you visit this site, attackers could try to steal information like your passwords, emails, or credit card details.

What can you do about it?

The issue is most likely with the website, and there is nothing you can do to resolve it.

If you are on a corporate network or using anti-virus software, you can reach out to the support teams for assistance. You can also notify the website’s administrator about the problem.

I took Firefox's advice, and did not venture further, but I was interested to know more about the so-called "American Culture Project." I found out something about it from the April 4, 2021 posting from from Heather Cox Richardson, the historian who produces a daily Substack newsletter, "Letters From An American." Here's what Richardson told me:

As current-day Republican lawmakers fall farther out of sync with what the majority of Americans want, they have turned to the courts to shore up their vision of a world in which government cannot regulate business, protect civil rights, or provide a basic social safety net, but can enforce rules popular with evangelical religious practitioners (although evangelical religion is also on the wane, apparently in part because of its political partisanship). “By legislating from the bench, Republicans dodge accountability for unpopular policies,” writes Ian Millhiser in a terrific piece in the New York Times on March 30. “Meanwhile, the real power is held by Republican judges who serve for life — and therefore do not need to worry about whether their decisions enjoy public support.”

And yet, the party is nervous enough about its eroding power base that a Republican-aligned group has launched an initiative called the “American Culture Project,” intending to redirect the “cultural narrative” that its organizers believe “the left” now controls with “cancel culture” and “woke supremacy.” Set up as a social welfare organization, the American Culture Project does not have to disclose its donors or pay federal income taxes. Through ads on Facebook and other platforms, it hopes to swing voters to the Republicans; it is organized in at least five states-- Florida, Illinois, Michigan, Ohio, and Virginia—under names like “Arise Ohio,” “Stand Up Florida,” and “Mighty Michigan.”

A fundraising email shared with Isaac Stanley-Becker of the Washington Post, who broke the story, says, “We are building assets to shape and frame the political field in advance of the 2022 election and beyond…. [Y]our support of our outreach can be the difference between the U.S. House of Representatives and the U.S. Senate staying under control of the Democrats or shifting back to pro-freedom Republican majorities.”

I did read the Stanley-Becker article in The Washington Post, which is where I got the picture of Tillman. That article says the following:

[The] website [of the American Culture Project] says its mission is to “empower Americans with the tools and information necessary to make their voices heard in their local communities, statehouses and beyond.

Undisclosed ... is the nonprofit’s partisan goal. Arise Ohio and similar sites aimed at other politically pivotal states are part of a novel strategy by a little-known, Republican-aligned group to make today’s GOP more palatable to moderate voters ahead of the 2022 midterms by reshaping the “cultural narrative” on hot-button issues.

Click this link to read the American Culture Project fundraising letter obtained by The Washington Post. The letter pretty clearly outlines what the American Culture Project is really all about. "Reclaiming The Public Narrative," as the American Culture Project outlines its objectives, really means to mount an "always on" propaganda effort, based on the kind of sophisticated voter identification and voter manipulation efforts documented so well by Zeynep Tufekci in her very important article, "Engineering The Public."
If we would rather not be "engineered," then our personal involvement in an effort to "reclaim politics," formerly known as "democratic self-government," is the obvious antidote. "Culture" is important, of course, but "politics" is how we govern our society.
Let's keep focused on that rather critical truth!
Image Credit:
https://www.washingtonpost.com/politics/republicans-midterms-digital-influence/2021/04/03/391103a8-8c0e-11eb-a730-1b4ed9656258_story.html