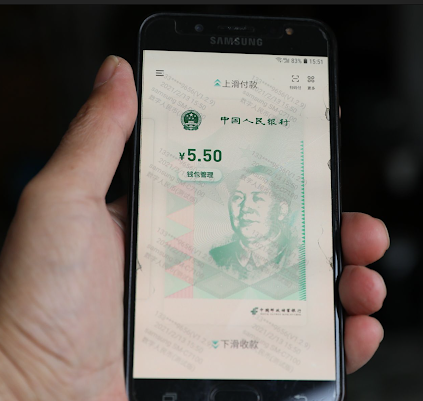 An April 5, 2021 article in The Wall Street Journal discusses China's creation of its own digital currency. Here's a link to the article online. Just in case there is a paywall prevention problem (as is likely for non-subscribers), I am providing this link to a PDF version. The article is fairly long, but is definitely worth reading. At least, I think so.
As I read the article, two issues of concern were presented. First, this effort by China to create its own national digital currency is seen as part of a strategy to "shake a pillar of American power." The Wall Street Journal is concerned about that:

Beijing is ... positioning the digital yuan for international use and designing it to be untethered to the global financial system, where the U.S. dollar has been king since World War II. China is embracing digitization in many forms, including money, in a bid to gain more centralized control while getting a head start on technologies of the future that it regards as up for grabs....

That an authoritarian state and U.S. rival has taken the lead to introduce a national digital currency is propelling what was once a wonky topic for cryptocurrency theorists into a point of anxiety in Washington.

Asked in recent weeks how digitized national currencies such as China’s might affect the dollar, Treasury Secretary Janet Yellen and Federal Reserve Chairman Jerome Powell have said the issue is being studied in earnest, including whether a digital dollar makes sense someday....

The chance to weaken the power of American sanctions is central to Beijing’s marketing of the digital yuan and to its efforts to internationalize the yuan more generally. Speaking at a forum last month, China’s Mr. Mu, the central bank official, repeatedly said the digital yuan is aimed at protecting China’s “monetary sovereignty,” including by offsetting global use of the dollar.

In a 2019 war game at Harvard University, veteran U.S. policy makers scrambled to craft a response to a nuclear-missile development by North Korea secretly funded with digital yuan. Because of the currency’s power to undercut sanctions, the participants, including several who are now in the Biden administration, deemed it more threatening than the warhead.

Nicholas Burns, a longtime American diplomat and favorite to be ambassador in Beijing, told the group, “The Chinese have created a problem for us by taking away our sanctions leverage.”

As China’s marketing for the digital yuan kicks into high gear, an English-language animation circulated online by state broadcaster CGTN shows a man in an American-flag shirt knocked out by a golden coin depicting digital yuan.

Frankly, I am not so sure that challenges to American hegemony, financial and otherwise - that hegemony being what Americans tend call America's "global leadership" - must automatically be considered a "bad thing." If the War in Vietnam didn't adequately illuminate the problems caused by an American presumption that the United States should be running the world, surely the War in Iraq ought to have done so.
A second concern, also mentioned in the article, struck me as more important; namely, the inherent features of the kind of digital currency that China is now about to deploy (first nationally, and then globally). Digital currencies, as opposed to the paper kind, have some features (beyond convenience) that everyone should keep in mind:

Elements of this kind of control already exist in China, as digital payments have become the norm. Mr. Mu has said the central bank will limit how it tracks individuals, in what he calls “controllable anonymity.”

The money itself is programmable. Beijing has tested expiration dates to encourage users to spend it quickly, for times when the economy needs a jump start. It’s also trackable, adding another tool to China’s heavy state surveillance. The government deploys hundreds of millions of facial-recognition cameras to monitor its population, sometimes using them to levy fines for activities such as jaywalking. A digital currency would make it possible to both mete out and collect fines as soon as an infraction was detected.

The authoritarian nature of the Chinese government should be of concern to everyone, of course, but the digital danger that caught my attention is the implicit suggestion in this Wall Street Journal article that the United States should get with the same program and initiate a digital currency itself. According to the article, both Treasury Secretary Janet Yellen and Federal Reserve Chairman Jerome Powell are starting to think that this might be a good idea.
The temptation to utilize technologies that will extend the government's ability to exercise authoritarian control over members of the public is a temptation not limited to governmental officials in China. If the United States created such a digital currency it might provide a lot of "convenience" to citizens and residents of the United States. Furthermore, a digital currency could provide some very significant operational benefits to government - besides helping to forestall any challenge to the domination of the dollar in global finance.
But think about it, folks. Do we really want our government to know, in real time, about every one of our financial transactions?
Maybe it's just because I have been teaching a course in "Privacy, Technology, And Freedom" for so many years, but I think the answer to that question should be pretty clear: "No."
Image Credit:
https://www.wsj.com/articles/china-creates-its-own-digital-currency-a-first-for-major-economy-11617634118