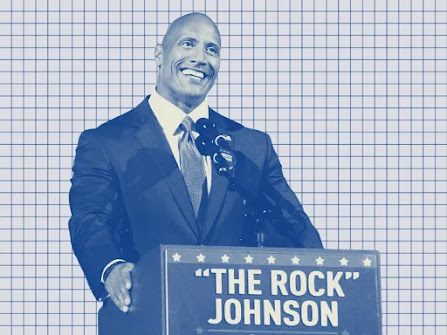 California Governor Gavin Newsom will almost certainly face a recall election later this year, and handicapping the outcome has already begun. Many political observers have compared Newsom to Gray Davis, a former governor who was recalled. In general, political commentators think Newsom is in a lot stronger position than Davis was. For one thing, big donors are stepping up for Newsom. For another thing, at least until recently, there hasn't been any "celebrity candidate" who is planning to run in the recall. Davis had to face off against Arnold Schwarzenegger, who was immensely popular. Davis, most emphatically, was not.
The possibility of a "celebrity" contender in the upcoming recall just started getting more real. Yesterday's paper reported that Caitlyn Jenner is thinking about running. Jenner, who is seventy-one years old, has been "an Olympic hero, a reality TV personality and a transgender rights activist." Her next step could be candidate for California governor. I am pretty dubious, myself, that Jenner could pull off a recall win against Newsom, but that newspaper article yesterday quoted California Republican national committeeman Shawn Steel, who said Jenner “is not to be discounted at all."
The FiveThirtyEight website, which specializes in the analysis of political polls, also ran an article yesterday, and I find its political speculations significantly more credible than the musings of Steel, a Republican Party apparatchik in a state that is profoundly unimpressed by the Republican Party. The FiveThirtyEight story featured the picture at the top of this blog posting, and was headlined, "Why Americans Can’t Resist A Celebrity Political Candidate." Its "Pollapalooza" feature was short, and told readers the following:

Are Americans in favor of the celebrity politician post-Trump? Seems like it, according to recent polling. The consumer research platform Piplsay found earlier this week that 58 percent of respondents said they would like to see one or both of the actors Matthew McConaughey and Dwayne “The Rock” Johnson launch bids for the Texas governorship and U.S. presidency, respectively. (Of course, the poll isn’t perfect — lumping answers about two different actors’ potential political aspirations under one question is not a good use of polling.) Other actors who people believed might make good future presidents included Angelina Jolie, Will Smith and Tom Hanks.

I do remember reading, a little while back, that "The Rock" had some idea that he might run for President, someday. And we all remember Ronald Reagan, right? Actor; then Governor; then President.
I looked up Johnson, just to find out where  he was born and where he lives now. Where do you think? Born in Hayward. Lives in Los Angeles.
If I were Newsom, despite all the money, I think I'd start to worry - at least just a little bit!
Image Credit:
https://fivethirtyeight.com/features/why-americans-cant-resist-a-celebrity-political-candidate/