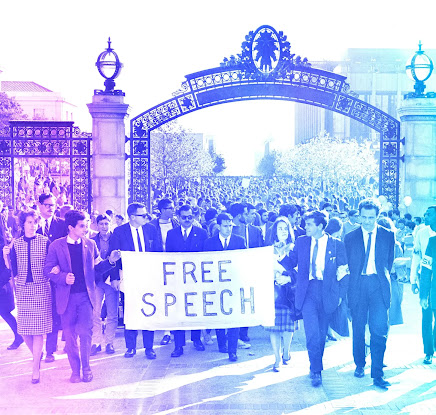 This picture, dated 1964, appeared at the top of an article in The New Yorker on March 22, 2021. The image was provided to the magazine courtesy of the Oakland Tribune Collection and the Oakland Museum of California. Design credit for the illustration was given to Paul Sahre.
What attracted me to the article, besides the picture, which brought that era right back into my immediate consciousness, was this statement, which served as a "sub-headline."

The movement inspired young people to believe that they could transform themselves - and America.

In fact, I believed that then, and I still believe it now. And the truth that we can transform ourselves, and America, is not a truth that applies only to "young people," either.
If you weren't part of the "New Left" yourself, and so don't really have a clear idea of how it started and what it was all about, I commend that New Yorker article to your attention. The article was written by Louis Menand, a professor at Harvard, and is titled, "The Making of the New Left."
Not only did I like that sub-headline at the very beginning of Menand's article, I liked how his article ended, too:

The nation was at a crossroads in the nineteen-sixties. The system did not break, but it did bend. We are at another crossroads today. It can be made to bend again.

That's true. I can speak from personal experience. I was there.
I have only one amendment to Menand's closing, though. It's just a one-word change:

The system did not break, but it did bend. We are at another crossroads today. It MUST be made to bend again.