#103 / Defenders Of The Rainforest 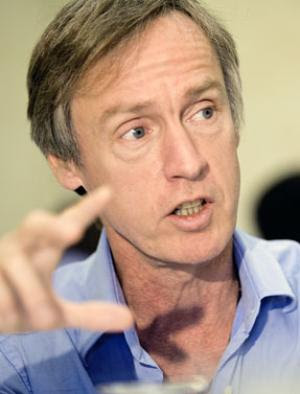 Dr. Stephan Schwartzman, pictured above, is known as kwaakriti (spider monkey) to the Panará people of the Amazon. Schwartzman is a Senior Director with the Environmental Defense Fund (EDF), and works on tropical forest policy. A recent "Special Report" from EDF, sent to EDF Members, calls Schwartzman a "defender of the rainforest."
The Amazon Rainforest desperately needs defending. See the picture below for just one indication of the extent of the ongoing damage. The article from which I obtained the picture, a New York Times report dated November 30, 2020, states that:

The scale of deforestation in Brazil’s Amazon rainforest surged to a 12-year high in 2020 ... with destruction soaring since President Jair Bolsonaro took office and weakened environmental enforcement. In 2020, destruction of the world’s largest rainforest rose 9.5 percent from a year earlier to 11,088 square kilometers — about 4,280 square miles, or a little smaller than Connecticut... 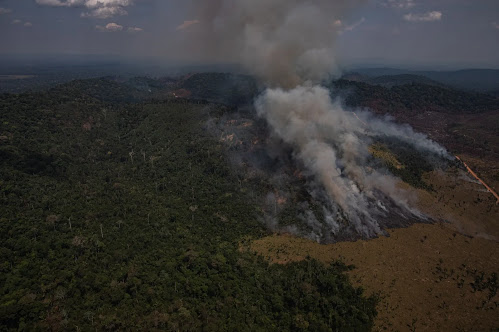 During the year and a half that Schwartzman lived with the Panará people, he stayed "in a thatch-roofed house, sleeping in a hammock and navigating between rivers of fire ants." He learned the language, and ultimately helped the Panará successfully to reassert their land rights over the tribe's traditional territory, which was about the size of the state of Delaware.
Instead of burning off the forest, to provide grazing land for cattle - all the better to supply the demands of MacDonald's and Burger King for more and more beef - the Panará are now living in harmony with the natural environment, precious not only to them, but to every human being living on the planet.
As The Times says in its article, "the Amazon is the world’s largest rainforest, and its protection is crucial to stopping catastrophic climate change because of the vast amount of carbon dioxide it absorbs."
Along with dealing with the pandemic, the United States government faces other critical tasks. For instance, we need to move the country away from the outrageous income inequality that is poisoning our politics (and our future). We must also find a way to provide more housing for average and below-average income people, and health care for all. Sizable challenges are demanding the government's attention, but let's not forget this: besides everything else, the United States government needs to move with the utmost speed to counter what is happening in Brazil, and in other parts of the Amazon Basin.
We, the people, are the ones who are supposed to tell the government what to do, and what our priorities are. We need to make protection of the Amazon a priority that the our government simply must address. Our lives do depend on it, and the government is only going to respond and act if we organize, and if we demand and insist that it do so.
In other words, we all need to become "Defenders of the Rainforest."
With or without the fire ants!
Image Credits:
(1) -https://www.edf.org/people/steve-schwartzman
(2) - https://www.nytimes.com/2020/11/30/world/americas/brazil-amazon-rainforest-deforestation.html