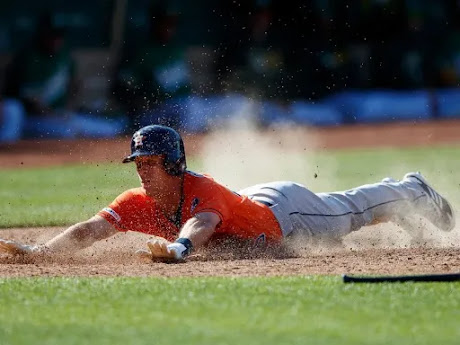 This great picture was scavenged from one of the many political bulletins that routinely penetrate my email inbox. The thought that came to my mind, immediately upon seeing the photo, was that this ballplayer would soon be celebrated: "Safe at Home!"
That "Safe at Home" phrase, of course, is most commonly utilized in baseball commentary, in just the way I imagined it, and that "Safe at Home" proclamation is almost always expressed with great enthusiasm. When a runner on third base tries to score on an infield hit, the question will necessarily be posed. What's going to happen? Will he make it? Those who try to make it "Home" aren't always successful - but it's most exciting when they are!
"Safe at Home" has now also acquired another meaning. During the last year, almost all of us who are lucky enough to have homes to repair to have found ourselves self-isolated inside the protective space that our homes provide. Sometimes, our self-isolation at home has been willingly accepted. Other times, perhaps, not so willingly. Knowing, however, that venturing out into public spaces would inevitably expose us to the dangers of the coronavirus has kept a lot of people inside. When congregating with other people is verifiably risky, we all have learned that we might be better off to be "Safe at Home."
That "Safe at Home" position has had some consequences for the kind of public participation that is the sine qua non of democratic politics. Anyone following local politics in Santa Cruz, California, for instance, has observed how the Santa Cruz City Council and the Santa Cruz County Board of Supervisors have so quickly and readily accepted the idea that members of the public should not be allowed into the same room with the elected officials who supposedly represent them. Both bodies could have made arrangements for socially distanced meetings, with remote access as an alternative. Both bodies have chosen not to.
The result (particularly at the City Council) has been decisions that seem oddly detached from an understanding of the real impact that the decisions will have on the public. For instance, the City Council has just recently voted, unanimously, to begin a process to apply high-density (high-rise) General Plan designations on the "South of Laurel" neighborhood. Any decision to begin such a process was supposed to follow a vigorous public outreach effort, but no such public outreach effort was ever made. Still, the Council forged ahead. There was no one in the room but the Council Members and the staff, as this staff-recommended proposal was ratified. Well-connected landowners in the area may be expecting a windfall - and may get one, too - but city residents in general, and those whose neighborhood is about to be transformed, have had no in-person opportunity to have their say.
Even more amazing was another recent City Council decision, again decided upon with no members of the public in the room. That decision, to enact a so-called "Outdoor Living Ordinance," directed the City Police Department, and other city staff, to require any homeless person found sleeping or living in a tent (and particularly in any homeless "camp") to pack up that tent at 7:00 a.m. every day, along with any sleeping gear and any personal possessions that the homeless person might have, and then to walk the streets during daylight hours. Homeless persons would be allowed to sleep at night, just not in any area where homeless persons are now sleeping, and where there might be some public facilities they could utilize. The City ordinance suggests that the best place for homeless persons to sleep (and only between sundown and sunup) would be on the sidewalks of residential streets.
Self-governing communities need to interact, in person. Elected representatives who find it comfortable to make staff-recommended decisions without having actually to see the members of the public who will be affected, and who care about what the decision might mean, are undermining the democratic process.
Democracy is a "public" thing. It will not be "Safe at Home."
Image Credit:
FiveThirty Eight 3-22.jpg.webp