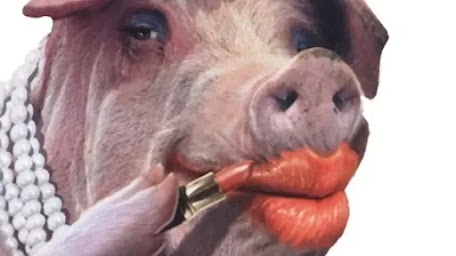 The Santa Cruz City Council will consider an anti-camping ban on its February 23rd agenda. That's tomorrow, for those who may have lost track of time. The Council will be discussing the ordinance starting at 5:30 in the afternoon on Tuesday.
The ordinance proposed for adoption was dreamed up by the staff, not by our elected City Council Members, and it would redefine homelessness in beautiful Santa Cruz, California. It would do that by renaming the Chapter in our Municipal Code that currently relates to "Camping," and instead call the relevant Chapter "Regulations For Temporary Outdoor Living." Isn't that a nice name? I think the most suitable characterization of that proposed change in the nomenclature is "putting lipstick on a pig." Does the City Manager really think that he and the others proposing this ordinance can make it look beautiful?
Don Lane, a former City Council Member, has said that the proposed ordinance provides "Something for everyone… not to like." That is undoubtedly true. Judging by his blog post on the topic, however, former Council Member Lane does seem to like the proposed ordinance, all things taken into account, saying that a proposal to deal with homeless camping is "long overdue!"
At least three current City Council Members also like the proposed ordinance (it takes four to enact it). The Mayor (Donna Meyers) and Council Members Martine Watkins and Renee Golder have all endorsed the proposed ordinance in a staff memo sent to the Council. Astute observers will note that these endorsements of the ordinance by the group just named have all occurred prior to the Council Members hearing from the public.
Let's be honest, though, Council Members, who cares about the public? Right? Who actually thinks that members of the public might have anything to contribute, or that their views might matter? In our contemporary city politics, the staff proposes and the Council endorses. It works for developers, after all. Whatever the staff recommends, the Council does it. Same thing here.
Well, what do these "Regulations For Temporary Outdoor Living" actually provide? I think three aspects of the proposed ordinance are worth examining.
First, the proposed ordinance specifies where "Temporary Outdoor Living" is absolutely prohibited. That includes most private property, and twelve different "at risk" areas. You can consult the list of the "at risk" areas in which "Temporary Outdoor Living" is prohibited by reading Section 6.36.040 (a) of the proposed ordinance. Those familiar with the City will quickly understand that this list includes almost every place that homeless persons now camp.
Second, "Temporary Outdoor Living" is now going to be much more highly regulated. Not only would a homeless person have to find a place that is not completely prohibited by the ordinance, such a homeless person would also have to pack up his or her belongings, tents, sleeping bags, and personal property every day, between 8:00 a.m. and 8:00 p.m. No tents or sleeping bags during the daytime, even if you can find a spot that is not absolutely and categorically prohibited in the first place. You can see why they're calling it "TEMPORARY Outdoor Living." You get to "live" only when you're asleep.
Third, it is important to look at the map to get a real sense of where homeless persons might be able to survive. If you click on this link, or consult the image below, you will see that there are large areas of RED. These are the areas in which "Temporary Outdoor Living" is prohibited at all times. Note that this includes virtually all the areas where there are at least some sanitary facilities that might be available to homeless persons. Specifically, the entire downtown area is off limits. 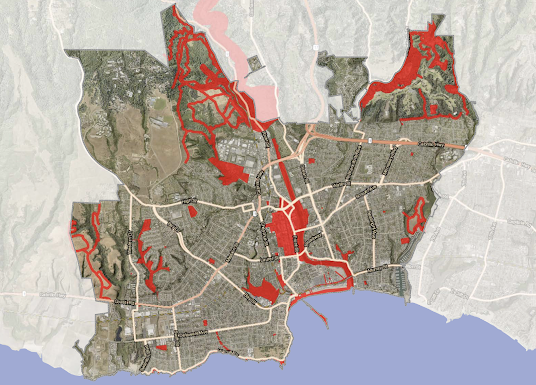 Where, then, are homeless persons to go? Well, from 8:00 a.m. to 8:00 p.m. homeless persons are free to wander wherever they want. They just can't deploy any "Outdoor Living Paraphernalia" during those hours. When it's time to sleep, though, at 8:00 p.m., what then?
Here's where the proposed "Temporary Outdoor Living" ordinance gets really creative. "Nighttime camps" are alright - just not in the RED areas. But the proposed ordinance does recognize that people need to sleep - even homeless people. So, here is the code section [6.36.040 (b)(5)] that explains how this proposed system is supposed to work:

For the purposes of allowing unsheltered people to sleep at night during times when shelters are full, except in cases of critical need (including, but not limited to, increased fire risk; blocking access to a home, business, or a parking lot of a building; blocking access to both sides of the sidewalk on one street; or blocking the sidewalk in a way that that causes pedestrian use of the sidewalk to not be maintained for at least one side of the street), City staff shall not, on City sidewalks, outside of those areas specified in 6.36.040(a) where Outdoor Living Encampments are prohibited at all times, enforce SCMC section 15.32.010 against persons experiencing homelessness, between the hours of 8:01 PM-7:59 AM.

For anyone having problems with the legal syntax, this means that homeless persons are invited to find places to pitch their tents on residential streets throughout the City, including specifically on city sidewalks. No sanitary facilities or trash containers will be available in any of the locations in which such "Temporary Outdoor Living" is going to be allowed (from 8:00 p.m. to 8:00 a.m.), but why worry? All those campsites will magically disappear at 8:00 o'clock each morning. What could go wrong?
In case you haven't already figured it out, what is being proposed is both unworkable and incredibly inhumane. Unless the City is actually going to do something that will address the human needs of homeless persons, which would have to include identifying some place in which a homeless person might safely remain, sheltered from the weather, during all twenty-four hours of the day and night, I'd suggest that the City not try to pretend that it's doing something positive, when it really isn't.
oooOOOooo
Here's a question: Do you think, if YOU were on the City Council, you'd like to hear from the public before endorsing a proposal that invites homeless persons to camp on almost every residential street in the City (from 8:00 at night to 8:00 in the morning)?
If you think that affected members of the public ought to expect that their elected City Council Members would want to hear from them before signing off on a plan to turn the sidewalks in front of their homes into potential "Outdoor Living" sites - i.e., into homeless tent spots, which is what is being suggested by the City Manager and the other City bureaucrats - then your name is obviously not Donna Meyers, Martine Watkins, or Renee Golder.
You remember those names, right? Those are the Council Members who signed off on this amazingly unworkable and inhumane plan, without hearing from the public - and probably without even thinking about it. And remember.... those Council Members were elected to represent you!
You can communicate with the Santa Cruz City Council by sending an email to the general City Council email address:

You can also participate in Tuesday's City Council meeting by following the instructions that are found right at the top of the agenda.
The homelessness crisis is severe. The remedy, ultimately, must come from bringing in resources from those who have resources. Any particular billionaires come to mind? Or, maybe we might ameliorate the crisis by redirecting funding that is going to less worthy causes. Any particular military adventures or military projects that you think might be less important than feeding the hungry and housing the homeless?
We, as a local community, should be using our political power and influence to work for real solutions, not trying to pretend we are doing something positive for our community by schemes like this lipstick on a pig "Outdoor Living" ordinance.
You can consider this blog posting as an editorial comment!
Image Credits:
(1) - https://capitalbooksonk.com/putting-lipstick-on-a-pig
(2) - City Map of Prohibited Areas