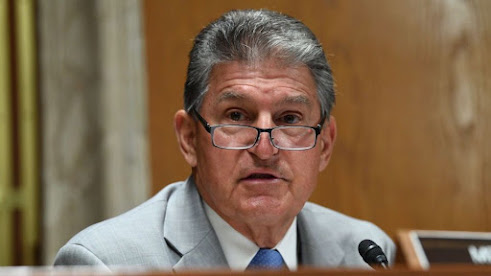 I wouldn't say that Senator Joe Manchin, pictured above, is my favorite United States Senator, and Kimberley A. Strassel, who is a  columnist for The Wall Street Journal, definitely wouldn't qualify as one of my favorite columnists, either.
On March 12, 2021, the day that The New York Times ran an editorial titled, "Save Democracy. Kill the Filibuster," Strassel took Manchin to task in her "Potomac Watch" column. Online, Strassel's column was headlined, "Joe Manchin's Filibuster Test." In the hard copy version, Strassel's column was headed "Parsing Joe Manchin." Strassel's complaint was that Manchin might do something that would eliminate or weaken the filibuster, the Senate rule that requires sixty votes to pass most normal legislation. Sixty out of one hundred. Sixty-percent!
The Times' editorial began by making its case for the passage of H.R. 1, the "For The People Act." This bill would enact a set of voting rights and election security reforms that The Times called "desperately needed." The Times was alluding to the fact that a number of states are currently in the process of enacting state laws that would effectively disenfranchise large numbers of voters. Black and Brown voters are particularly being targeted, but generally any kind of voter who might have voted for Joe Biden in the 2020 election, as opposed to voting for Donald J. Trump, will face increased barriers to voting if these state-level efforts are successful.
As The Times properly notes in its editorial, something needs to be done to prevent these voter disenfranchisement efforts from coming to fruition. They really do put democracy in peril, and  something must be done if we want to save democracy. The Times is not alone in making this point. David Roberts, for instance, writing in his Substack newsletter, Volts, outlines "The Most Important Job Ahead For Democrats."

Hello, beloved readers and listeners! Today I’m going to make an argument that is very important to me: Democrats must pass substantial democracy reform before the 2022 elections. If Dems don’t get this done, the US is in for a long period of political darkness. Democracy in America could very well perish. Climate change will become unsolvable. Every goal progressives seek — taxing the rich, funding infrastructure, fixing immigration, boosting unions, you name it — will move out of reach. It is, I say with some risk of understatement, the most important thing in the world.

As it turns out, Joe Manchin may be the key to deciding whether or not we "save democracy" (in the words of The Times), or whether we "save the world" (in the words of David Roberts). To save democracy and the world, it is imperative that the Congress pass the "For The People Act," or something similar, since such legislation would prevent state legislatures from disenfranchising large numbers of voters who might be inclined to vote for politicians who identify with the Democratic Party, and/or who would try to deal with some of the pressing problems identified by Roberts and The Times.
Given that the United States Senate is currently deadlocked with fifty Democratic Party votes and fifty Republican Party votes, with Vice President Kamala Harris being able to cast a deciding vote in the case of a tie, it is mathematically obvious that no bill disfavored by Republicans is going to pass the United States Senate if its passage requires sixty votes. That means, to pass voting rights legislation, the filibuster will have to go.
The filibuster is the product of a Senate rule, and the Senate can change its rules with a majority vote. So, the filibuster can be changed unless one or more Democrats refuse to vote for the change. Here's where Joe Manchin comes in. Manchin has previously made contradictory statements about his willingness to eliminate or change the filibuster. He has said he would "never" do that. But he has also said that he'd perhaps vote to make it "more painful" to use the filibuster.
Since Manchin comes from West Virginia, a very conservative state, a state that overwhelmingly voted for Donald J. Trump in the last election, with Trump winning a majority in all fifty-five of the state's counties, it is clear why Manchin would not want to be a crusader for eliminating the filibuster. On the other hand, Manchin is a Democrat, and the political future of Democratic Party candidates (including Manchin) may well hinge on whether everyone can vote (in which case the Democrats should do alright, generally speaking, since positions held by the Democrats are also held by the majority of Americans). On the other hand, if current Republican Party-backed voter suppression efforts work, the Democratic Party may, indeed, be facing that "long period of political darkness" that Roberts talked about.
Back to Strassel! Strassel's column might just as well have been written for an audience of one (Joe Manchin). How could you do this, Joe?" That's what she is asking, in response to indications that Manchin might, actually, be willing to make some changes in the filibuster. Strassel is urging Manchin not to desert his commitment to what Strassel characterizes as "minority rights." The idea of respecting the rights of those in a minority to make their points and to engage in the discussions that precede a vote is absolutely important. It's the essence of democracy. Manchin is correct, both politically and substantively, in his past statements that he will never abandon "minority rights."
But Strassel makes a mistake in presenting her argument. She wants Joe (and all of us) to see the filibuster as a way to protect "minority rights," which isn't really the truth. Strassel makes a telling concession in her column. Talking about the "other" Democrats, the ones that Strassel hopes Manchin will ignore, she says:

Their goal is a “reform” that would destroy the minority’s ability to stop bills.

Strassel wants the "minority" to be able to stop any legislation with which the minority disagrees. That's what the filibuster does, in its current incarnation, and that is not a protection of "minority rights." It is a protection of "minority rule."
I am really hoping that Joe Manchin doesn't fall for this fallacious argument, and that he pays attention to The New Yortk Times, instead of following the guidance of Kimberley Strassel and The Wall Street Journal, who want to pass off the filibuster as a legitimate way to protect "minority rights."
If Joe Manchin doesn't fall for that fallacy, I'm thinking, he might even become one of my favorite United States Senators!
Image Credit:
https://finance.yahoo.com/news/democratic-senator-joe-manchin-criticized-213710499.html