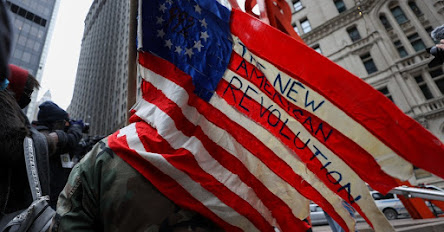 Chris Hedges, a Presbyterian minister, and a Pulitzer Prize-winning journalist, has a very jaundiced view of American politics. That's largely understandable, of course!
In his recent article, "The Oligarchy Knows Class Warfare Is the Real Fight—Why Don't Liberals?" Hedges sums up our current situation this way:

The death spiral of the American Empire will not be halted with civility. It will not be halted with the 42 executive orders signed by Joe Biden, however welcome many are, especially since they can, with a new chief executive, be immediately revoked. It will not be halted by removing Donald Trump, and the crackpot conspiracy theorists, Christian fascists and racists who support him, from social media. It will not be halted by locking up the Proud Boys and the clueless protestors who stormed the Congress on January 6 and took selfies in Mike Pence’s Senate chair. It will not be halted by restoring the frayed alliances with our European allies or rejoining the World Health Organization or the Paris Climate Agreement. All of these measures are window dressing, masking the root cause of the demise of America — unchecked oligarchic power and greed. The longer wealth is funneled upwards into the hands of a tiny, oligarchic cabal, who put Biden into office and whose interests he assiduously serves, we are doomed.
Once an oligarchy seizes power, deforming governing institutions to exclusively serve their narrow interests and turning the citizenry into serfs, there are only two options, as Aristotle pointed out — tyranny or revolution.

Hedges' commentaries are almost always acerbic, and this analysis fits the profile. Read the entire article for the full treatment, but in the text just quoted, you can get a hint of just how bitterly Hedges views our recent election. Notice that he attributes the election of President Biden to a "tiny, oligarchic cabal." Ordinary Democratic Party voters, most of whom are the opposite of an "oligarchic cabal," don't seem to factor. Neither do the Republican women who deserted their party to vote for "Sleepy Joe." Neither do  the Black voters of Georgia, rallied by Stacey Abrams. Neither do the supporters of former presidential candidate Bernie Sanders, who self-identifies as a socialist. I think it's fair to say that President Biden's election depended on all of those cohorts, and more, and unless all of them were, in fact, masterfully manipulated by Hedges' "oligarchic cabal," they all helped put Biden into office.
Attention, of course, is what counts in the arena of our contemporary political discussion and disputation, and Hedges is aiming to grab his readers' attention, in order to make his point. Exaggeration and overstatement tend to do that. It's a proven technique. So, let's not dismiss Hedges' argument out of hand, just because of his overstatement and exaggeration. He's just trying to get our attention. The power of money does rule our contemporary politics, and a decent politics, a politics that serves the needs of the majority of our citizens, must demand that the wealthy and well-connected give way to ordinary men and women.
More properly put, the majority of our citizens, ordinary men and women, must make the wealthy and well-connected give way. And for those not quite clear why I seemed to repeat myself, there, I want to emphasize that it will be necessary for ordinary men and women to adopt an "active" not a "passive" approach to the political changes we need. We need to move beyond appeals, requests, and even "demands," which are always aimed at someone else, someone who, supposedly, has the "real power," or who, at least, seems to have it.
"Tyranny" is letting other people run our lives, even if they do it with some modicum of benevolence, when pushed. "Revolution" means organizing to obtain what we believe is just and right, and then to govern ourselves in the way that the majority determines will best achieve our personal and collective objectives.
The problem with American politics today, from my point of view, is that those who have the ultimate power over our economy and society (that's us, folks) are not using their power, and are, instead, acting like spectators or supplicants. We keep "asking" for our political system, currently dominated by those with obscene wealth at their command, to do something for us. Usually, it doesn't come through. Democracy is always, of necessity, a "do it yourself" project!
The "revolution" we need does not require blood in the streets (in fact, that's contraindicated). All it requires is a change inside our minds. Once we truly realize that we, ordinary men and women, are actually able to insist that our social and economic arrangements meet our own needs, the revolution will begin.
Amidst the exaggeration and overstatement, I do believe that this is what Chris Hedges is trying to tell us. And I think he's right.
And so are Bernie Sanders and Stacey Abrams, too!
Image Credit:
https://www.commondreams.org/views/2021/02/02/oligarchy-knows-class-warfare-real-fight-why-dont-liberals