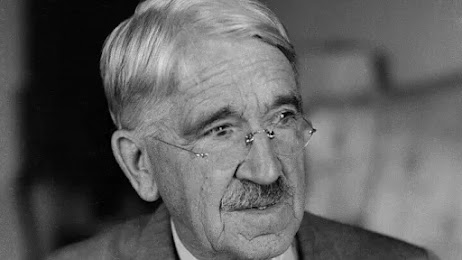 Empty Wheel is a news and opinion website, founded by Marcy Wheeler. Wheeler's writings focus on national security and civil liberties issues. However, there are other regular contributors, too. One of them, Ed Walker, has written a series of excellent articles on John Dewey, the American philosopher who is pictured above.
Walker's most recent article on Dewey, which appeared on March 6, 2021, is entitled, "Dewey's Aspirational View Of Democracy." Walker contends that Dewey outlines a "strikingly contemporary vision." Here is how Walker presents this vision, contrasting what Dewey proposes with the ideas of Sir Henry Maine:

Maine writes a defense of rule by an aristocracy of the best people, which I assume he derives from Plato’s Republic. Maine says democracy is the rule of the many, by which he means a quantitative, numerical form of government derived from the votes of a horde of isolated atomized individuals, all acting solely in their own interest. Dewey says that for Maine, “Democracy is nothing but a numerical aggregate, a conglomeration of units.”
Dewey compares society to an organism whose existence emerges from the actions of the people who make it up. Society exists only through the actions of its members, and we only know society by looking at the actions of the members. The success of the society depends on the success of the individuals and vice versa. Dewey claims that this view arises from the Republic.
Dewey thinks that our actions are mediated by our socialization (my word), so that in acting we are not isolated atoms. Instead, each of us is different way [sic] of expressing that socialization, and thus part of the group. Dewey thinks that the will of society is expressed in this way, through the combined acts of members. The will of society gains some expression through the functional definition of democracy as selecting and overseeing our officials (emphasis added).

I think Dewey is right. We are emphatically not a "horde of isolated atomized individuals." We are individuals, of course, but we are not only individuals. We are connected, as the fingers to a hand. Each one of us has an independent existence, with different skills and abilities, but we operate effectively only when we do so cooperatively. As I generally put it, "We are all in this together."
Dewey is also right about "liberty" and "freedom." Here is Walker's discussion:

Liberty in the dominant view means the freedom to do as one chooses, without regard to any other concern. In this view, the law is meant to punish actions that society deems unacceptable.
Dewey rejects this view. Society creates law, using that term in a broad way to cover statutes and formal rules of the state, moral and cultural demands and taboos, and informal rules of behavior. The law of a society represents its will at any time. The personhood of each individual is formed under the influence of this law. Today we would say that each individual internalizes the law. Thus the exercise of liberty by an individual is controlled by the law as instantiated in that individual.
In this way, liberty is self-restricted, but at the same time, the individual is free to explore the limits imposed by the law, and to seek changes. The individual is required to follow the formal laws and rules, but is free to flout the moral and cultural demands and taboos, and the informal rules, subject, of course, to social sanctions, like shunning and shaming. At bottom, in a democracy, the law is not imposed by an external force. It is shaped by individuals as one of their social roles, and internalized. It’s function is to channel the exercise of liberty (emphasis added).

The way I generally express this is by pointing out that the laws that govern our life together, and that establish our human world, are not descriptions of what must and will happen, but are "prescriptions" that tell us what we have decided we should do. These laws never state inevitabilities, but are the product of our free choice, and just as with a doctor's prescription, if one of our laws doesn't seem to be producing the positive effects that we had hoped, we can change the prescription, and thus change the laws that govern our lives together. Such changes always begin with one person, somewhere, who is able to inspire others that such a change is required.
Finally, Walker discusses Dewey's thoughts on equality:

Turning to equality, the vulgar meaning is numerical equality, equal portions of each desirable good. Dewey says that in a democracy equality has an ethical meaning. It begins with the view that each individual person is equivalent in moral worth to every other individual.
Wherever you have a man, there you have personality, and there is no trace by which one personality may be distinguished from another so as to be set above or below. It means that in every individual there lives an infinite and universal possibility.
This is the beauty of democracy: every person has the opportunity to become all that they can be, and those possibilities are unlimited (emphasis added).

It is probably time for me to reread John Dewey, whose vision of democracy is strikingly relevant to our contemporary situation. Consider this blog posting as an invitation to do that yourself!
Image Credit:
https://exploringyourmind.com/education-through-the-amazing-eyes-of-john-dewey/