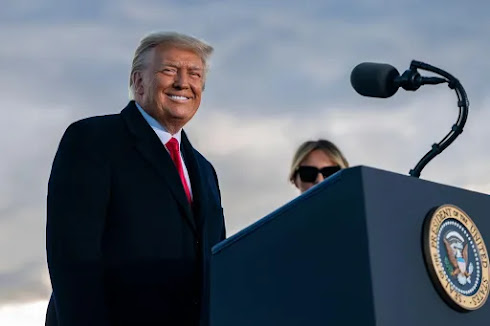 Slate.com, which is an online magazine specializing in news and commentary, headlined one of its recent articles this way: "Trump Didn’t Believe His Election Lies." Incidentally, I got the picture of our former president from the Slate article.
I was alerted to the article by a column in the March 31, 2021, edition of The Wall Street Journal. That column, written by Holman W. Jenkins, Jr., who is one of The Journal's regular contributors, had this to say about Slate's article:

I was arrested by this statement of the obvious.

Politics is a strategy game, like war or litigation: The truth gets spoken only if it’s useful...  Millions of voters see politics as nonstop mendacity (emphasis added).

Let me take exception to Jenkins' suggestion that everyone involved in politics lies, consistently and without exception. May I also say, as a member of the legal profession, that I take further exception to the claim that in litigation the truth only gets spoken "if it's useful." Judges, juries, and lawyers will not stipulate to any such a characterization. Mainly because it's not true. Secondarily, because if people truly believed that, our legal system could never succeed in achieving justice.
The same exact thing is true in the political realm. It is simply not true that elected officials and others involved in politics knowingly and systematically lie whenever they think it is "strategic" and tell the truth only when it's "useful." Sometimes, elected officials do lie. Our former president, for instance, was pretty good at that, but we must not expect that this is the "normal case."
We need to demand that we hear the truth, and we need to get mad when we don't. That is basically what Slate was saying about the lies told by our former president, but Jenkins wants people to believe that such lying is not a "big deal."
Wrong. Lying in politics (and in general) is a very big deal, indeed. If millions of voters do come to believe that the truth is never really spoken in the political debates and discussions that are supposed to help us make decisions about what we should do, then complete cynicism takes over, and the next step is totalitarianism. Here is Hannah Arendt on this topic:

In an ever-changing, incomprehensible world the masses had reached the point where they would, at the same time, believe everything and nothing, think that everything was possible and nothing was true… The totalitarian mass leaders based their propaganda on the correct psychological assumption that, under such conditions, one could make people believe the most fantastic statements one day, and trust that if the next day they were given irrefutable proof of their falsehood, they would take refuge in cynicism; instead of deserting the leaders who had lied to them, they would protest that they had known all along that the statement was a lie and would admire the leaders for their superior tactical cleverness (emphasis added).

This is precisely the kind of conduct indulged in by our former president, and Jenkins is urging his readers to admire him for his mendacity, for his "superior tactical cleverness."
The temptations to cynicism are manifold. Lots of politicians do lie. Many lie virtually all the time (see the picture at the top of this blog posting; even the smile is fake).
We must not accept this as "normal." We must not legitimize as appropriate what is a profoundly pathological and dangerous form of behavior.
It is not "obvious" that all politicians lie, all the time. If we accept that statement as true, we will never hear another true word.
Since some things actually are true, and other things are false, and since we need to know the difference, we make ourselves blind if we tell ourselves there isn't any way to know what is true and what is not.
Image Credit:
https://slate.com/news-and-politics/2021/02/trump-didnt-believe-election-lies-impeachment-trial.html