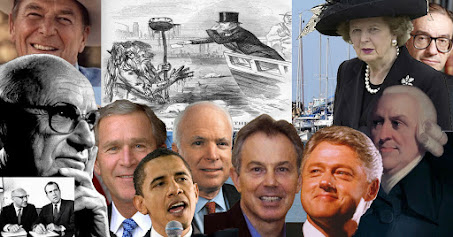 Not everyone can provide a quick and accurate definition of "neoliberalism." If you think that you might have some difficulty doing that (as I certainly would), here is how Wikipedia describes the doctrine:

Neoliberalism or neo-liberalism is the 20th-century resurgence of 19th-century ideas associated with economic liberalism and free-market capitalism. It is generally associated with policies of economic liberalization, including privatization, deregulation, globalization, free trade, austerity and reductions in government spending in order to increase the role of the private sector in the economy and society.

Another definition and explanation of neoliberalism can be found by clicking this link. That will take you to the article from which I got the image at the top of this blog posting.
As you will note from the cast of characters included in the picture, Adam Smith and Milton Friedman are two economists who are strongly identified with neoliberalism. Most of those pictured above, however, are politicians. I bet you can recognize them all. Politicians, more than economists, are the ones who have made neoliberalism into an actual thing. It's more than just some economic theory. Check out the policies listed in that Wikipedia definition. Neoliberalism is pretty much the sum total of of the policies that say how the world is currently being run.
The Guardian, the daily newspaper published in Great Britain, is a news source for which I have a great deal of respect. A recent article in The Guardian calls neoliberalism "the ideology at the root of all of our problems."
That word "ideology" caught my attention in the headline to the article, and then when I read the article, here is the statement that I found most thought-provoking:

Neoliberalism sees competition as the defining characteristic of human relations. It redefines citizens as consumers, whose democratic choices are best exercised by buying and selling, a process that rewards merit and punishes inefficiency. It maintains that “the market” delivers benefits that could never be achieved by planning.

"Citizens" may "consume," but their role is not defined by the fact that they do so. If "citizens" have been redefined as "consumers," then something has gone seriously wrong. Citizens are the active governing body of a democratic republic. In a representative democracy, citizens decide everything, and their democratic choices are not "exercised by buying and selling."
In fact, letting "the market" decide what happens is the antithesis of democratic self-government. It is the antithesis of "politics."
If you think that democratic self-government is a pretty good idea, and that we ought to get back to it, read up on "neoliberalism," and then determine that you will do everything that you can possibly do to escape from the ideology that is so clearly implicated in almost every one of our most significant social, political, economic, and environmental problems today.
Image Credit:
http://factmyth.com/neoliberalism-explained/