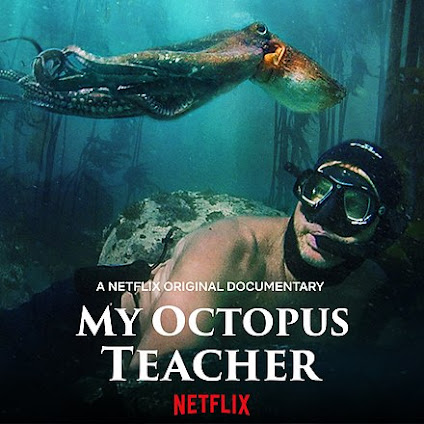 On the first of February, my blog posting was titled, "Salp Help," and reported on a little-known sea creature, the salp, which Wikipedia tells us is a "barrel-shaped, planktic tunicate." Few people comment on my blog postings, but I did get a comment on that one. The comment summed it all up in one word: "Nice."
Well, let me recommend another nice way to get to know more about the ocean environment. I have recently watched My Octopus Teacher, a 2020 Netflix Original film directed by Pippa Ehrlich and James Reed. The film documents a year spent by filmmaker Craig Foster forging a relationship with a wild common octopus in a South African kelp forest.
In one word (or maybe two): REALLY nice. Highly recommended!
Image Credits:
https://en.wikipedia.org/wiki/My_Octopus_Teacher