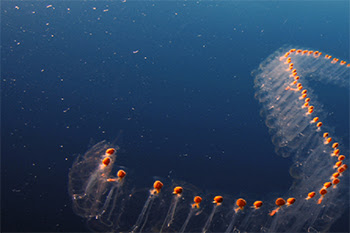 SALP - This pelagic creature can be found floating along as a single organism or in chain colonies that can reach several meters in length! The Salp is barrel-shaped with an incurrent on one end and an out current on the opposite end, this design also provide for locomotion in a thrusting jet-like motion. The picture above represents the common physical appearance of Salps with their gelatinous and transparent bodies. Salp are filter-feeders of bacteria and phytoplankton, this helps in the cycling of organic matter therefore playing an important roll in the ecosystem.

During the night, Salps will swim up to feed on the abundant amounts of food near the surface. When the sun begins to rise they descend back down to avoid predators. The Salp never tires or is ever hungry since it is continuously collecting food for energy. Once the Salp reaches a certain size it may begin to reproduce. They can make hundreds of babies at once as a string of cells that divide into tiny animals, all clones and connected together. This reproduction happens until thousands of tiny clones have been released.

I enjoy reading Rachel Kippen's column, Our Ocean Backyard, which regularly appears in my hometown newspaper, the Santa Cruz Sentinel. Rachel is the Executive Director of O'Neill Sea Odyssey, and on January 10, 2021, her column discussed salps.
Of course, I had never heard about salps, which Kippen calls an "unlikely relative." It turns out that salps are not only related to us, they can provide some pretty good advice if we decide to pay attention. Here is how Kippen reports the story:

If you’ve read this deep into what clearly has become an obsession, I implore you to consider this: when we dismiss organisms as overly simplified clusters of cells, rather than remarkably complicated miracles, we miss out on a whole lot. When ecologists parrot the “nature as teacher” motto, they say quite literally that we should learn from and not just about nature.
Salps have taught me that my individuality is important to group success, that crowded populations of species can still do great things for the world, that climate leadership comes in the form of responsible eating, and that my family tree extends far beyond the millennia of humans who’ve preceded me (emphasis added).

That's some pretty helpful advice from a filter feeder! With thanks to Rachel, let's pay attention!
Image Credit:
https://www.lamar.edu/arts-sciences/biology/marine-critters/marine-critters-3/salp.html