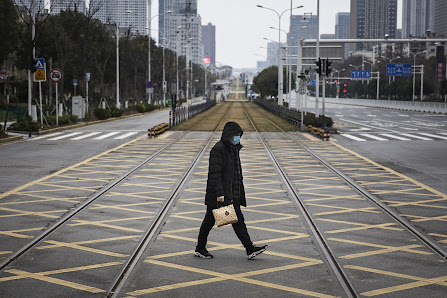 On January 23, 2021, The New York Times ran a column by Li Yuan, "How Beijing Turned China's Covid-19 Tragedy To Its Advantage." In the hard copy edition of the paper, the following subheading appeared above the main text: "Propaganda and Censorship."
The point made in the column was that the Chinese Communist Party was able masterfully to stifle any and all criticism of the Chinese government with respect to its handling of the outbreak of the Covid-19 pandemic. "Propaganda and Censorship" was how the CCP pulled this off.

To reclaim the narrative in the early days of the pandemic, as my colleagues have reported, the Chinese government began a tremendous behind-the-scene effort to make sure that the censors took control at even the most local level. They listened and read just about everything people posted. Then the censors either addressed the problems or silenced the dissenters. Chinese officials say the police investigated or otherwise dealt with more than 17,000 people who they said had fabricated or spread fake pandemic-related information.

Li Yuan's column was not written as a "compare and contrast" piece, so the column didn't go out of its way to note how badly the United States government had failed to head off adverse criticism with respect to its handling of the pandemic. Still, anyone reading that column in The Times would almost certainly remember how the Trump Administration spent almost the entirety of 2020 mired in various ineffectual efforts to appear to be competent, concerned, and in charge.
Far from turning a tragedy to its advantage, the Trump Administration managed to turn a tragedy into a catastrophe, translating a public health crisis into a political disaster, as well as a health disaster, and quite probably insuring that the president would lose his bid for reelection.
As Li Yuan describes what happened in China, after the pandemic first surfaced in Wuhan (see the picture, above, for a Wuham street scene, shortly after the virus hit), the key to the Party's success in suppressing criticism was based on its ability to demand, and impose, a "single narrative." The information that everyone received - from every source - was always consistent with what the Party said. "Fang Fang," for instance, "a Wuhan-based novelist," became the most vilified figure on the Chinese internet. "Her crime? Documenting her lockdown experiences in an apolitical account in an online diary."
Li Yuan, who is apparently now safe from any retribution by the CCP, made this comment:

This demand for a single narrative carries risks. It silences those who might warn the government before it does something foolish, like stumble into a conflict or interfere with China’s economic growth machine.
It also conceals the true feelings of the Chinese people. On the street, in person, most Chinese will be happy to tell you what’s on their minds, perhaps in exhaustive details. But China became a more opaque place in 2020. Online censorship became even harsher. Few Chinese people are willing to take the risks of speaking to Western news media. Beijing expelled many American journalists, including those at The New York Times.
This single narrative also means that people who don’t fit into it risk getting left behind (emphasis added).

Is a competent, concerned, and successful response to a national crisis, like the Covid-19 pandemic (or the much greater global warming crisis that threatens mass extinctions and the breakdown of human civilization), truly dependent on imposing a "single narrative?"
Officially, we in the United States don't think so, and since "we" are ultimately in charge of our system of democratic self-government, that's not the way we are going to do things here.
Note, though, that where freedom of speech and opinion flourishes in China is just where it flourishes here, too, "on the street and in person."
Considering what happened in the United States during this past, pandemic year, in which the internet hatched amazing stories, perhaps believed by millions, that were demonstrably false, and that abetted a direct assault on the Capitol Building, the home base of American democracy, it is ever more important that we find "reality" in our exchanges with other "real" people.
"Talking To Strangers" continues to be the right prescription for a free and democratic state.
Image Credit:
https://www.nprillinois.org/post/we-no-longer-wish-much-people-wuhan-share-stories-loss-and-survival