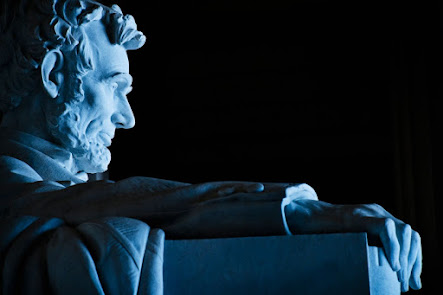 Abraham Lincoln has recently come in for some criticism. Some are questioning his genuine commitment to racial equality and racial justice. The United States Constitution has been getting some criticism, as well. Is the Constitution really a "Charter of Liberty," as we have always liked to believe, or is the Constitution "an agreement with Hell?" That second thing is what William Lloyd Garrison called it.
These issues are touched upon by Adam Lynd Rowe, in his recent book review in The Wall Street Journal, the book in question being The Crooked Path to Abolition, by James Oakes.
I think the following comment, found in Rowe's review, makes a good case for Lincoln:

Lincoln’s hatred of slavery was always rooted in his love of political freedom, what he called self-government. Radicals easily outpaced him in their attacks on slavery because they took the survival of political freedom for granted in a way that Lincoln never did. Self-government involves a fragile combination of assertion and restraint, governing others while acknowledging their right to govern us to the same extent. Slavery flatly contradicted this sacred principle. But righteous impatience with one’s fellow citizens is a temptation toward a subtler, more seductive form of despotism. Lincoln had warned against both dangers throughout his public life.
Autocratic and aristocratic governments throughout much of the world had abolished slavery during Lincoln’s lifetime. In 1861, the same year Lincoln was inaugurated, Czar Alexander II of Russia issued an edict that emancipated 23 million serfs. But emancipation alone, as Lincoln knew, is not the same as freedom. Lincoln’s ultimate concern was to save the ideal that made him hate slavery in the first place, to ensure that “government of the people, by the people, for the people, shall not perish from the earth.” (Emphasis added)

It is truly in "self-government" that our freedom is both discovered and perfected, and the process of self-government requires us to admit that the freedom of others is just as great as our own. We must be willing to let others govern us, to the same extent that we seek and assert the right to govern them. None of us - neither Democrats nor Republicans - are exempt from this requirement! A recent essay by Roger Berkowitz, the Founder and Academic Director of the Hannah Arendt Center at Bard College, makes the same point. His essay is called, "The Habits of Democracy."
This observation, of course - about our obligation to let others govern us, as a fundamental requirement associated with democratic self-government - is particularly appropriate in our current moment. The recent invasion of the Capitol by a Trump-inspired mob provides us with an example of what can happen when we forget that our agenda, and our hopes, may not be chosen by the majority. When this possibility eventuates, as it almost certainly will, from time to time, since such a possibility is always present, we must bear the outcome without rancor, if we are to preserve our democratic system and the freedom it protects.
I am with Rowe. I continue to believe that Lincoln never did forget this lesson, and that maintaining the integrity of the union, and our body politic, was always his greatest ambition. It is for this fact, above all others, that he is so appropriately revered.
Image Credit:
https://www.wsj.com/articles/the-crooked-path-to-abolition-review-strategy-and-secession-11610124329