A book review by Pankaj Mishra, printed in the February 1, 2021, edition of The New Yorker, suggests a rather remarkable parallel between Donald J. Trump and Chairman Mao Zedong.
Mishra's review was titled "Struggle Sessions" in the hard copy edition of the magazine, but the online version is headlined, "What Are the Cultural Revolution’s Lessons for Our Current Moment?" Surprisingly - at least to me - there may be quite a few such lessons! The following excerpt - discussing the Cultural Revolution inspired by Mao - will give you the flavor:

How did a tightly centralized state unravel so quickly? How could siblings, neighbors, colleagues, and classmates turn on one another so viciously? And how did victims and persecutors—the roles changing with bewildering speed—live with each other afterward? ...

Sensing political opposition in his own party, Mao reached beyond it, to people previously not active in politics, for allies. He tapped into widespread grievance among peasants and workers who felt that the Chinese Revolution was not working out for them. In particular, the Red Guards gave Mao a way of bypassing the Party and securing the personal fealty of the fervent rank and file. As the newly empowered students formed ad-hoc organizations, and assaulted institutions and figures of authority, Mao proclaimed that “to rebel is justified,” and that students should not hesitate to “bombard the headquarters.” In 1966, he frequently appeared in Tiananmen Square, wearing a red armband, with hundreds of thousands of Red Guards waving flags and books. Many of his fans avoided washing their hands after shaking his. Mao’s own hands were once so damaged by all the pressing of callow flesh that he was unable to write for days afterward. Predictably, though, he soon lost control of the world he had turned upside down.

To me, this description of Mao's Cultural Revolution echoes quite powerfully in the events of January 6, 2021, right here in the United States. Mishra makes the parallel directly, right at the end of his review, turning what I began to read as an article focused on the history of contemporary China into an article focused on us:

The great question of China’s Maoist experiment looms over the United States as Donald Trump vacates the White House: Why did a rich and powerful society suddenly start destroying itself?
The Trumpian assault on the West’s “olds” has long been in the making, and it is, at least partly, a consequence of political decay and intellectual ossification—akin to what Mao diagnosed in his own party. Beginning in the nineteen-eighties, a consensus about the virtues of deregulation, financialization, privatization, and international trade bound Democrats to Republicans (and Tories to New Labour in Britain). Political parties steadily lost their old and distinctive identities as representatives of particular classes and groups; they were no longer political antagonists working to leverage their basic principles—social welfare for the liberal left, stability and continuity for the conservative right—into policies. Instead, they became bureaucratic machines, working primarily to advance the interests of a few politicians and their sponsors.
In 2010, Tony Judt warned, not long before his death, that the traditional way of doing politics in the West—through “mass movements, communities organized around an ideology, even religious or political ideas, trade unions and political parties”—had become dangerously extinct. There were, Judt wrote, “no external inputs, no new kinds of people, only the political class breeding itself.” Trump emerged six years later, channelling an iconoclastic fury at this inbred ruling class and its cherished monuments.
Trump failed to purge all the old élites, largely because he was forced to depend on them, and the Proud Boys never came close to matching the ferocity and reach of the Red Guards. Nevertheless, Trump’s most devoted followers, whether assaulting his opponents or bombarding the headquarters in Washington, D.C., took their society to the brink of civil war while their chairman openly delighted in chaos under heaven. Order appears to have been temporarily restored (in part by Big Tech, one of Trump’s enablers). But the problem of political representation in a polarized, unequal, and now economically debilitated society remains treacherously unresolved. Four traumatic years of Trump are passing into history, but the United States seems to have completed only the first phase of its own cultural revolution (emphasis added).

The warning that Mishra provides is timely and on target. Our political parties today do appear to be "bureaucratic machines, working primarily to advance the interests of a few politicians and their sponsors." Until this situation is changed, we remain totally vulnerable to the kind of political dissolution that China experienced during the years of the "Cultural Revolution."
Mishra quotes the Romanian philosopher Emil Cioran as stating, "History is irony on the move." To save ourselves from the irony that the United States might perish in our own version of Mao's great populist movement, we must get out ahead of irony, and time is short. To avoid that fate, it will be necessary for us all to become more personally engaged.
But if the Cultural Revolution can be a lesson to us, it is clear that we must be engaged in political building projects that begin at the bottom, not with some inspirational leader at the top. And our building projects, too, must have us building together, lest "siblings, neighbors, colleagues, and classmates turn on one another," and with the kind of heart-rending joy we saw in those who invaded the Capitol on January 6th, bring a vicious end to the American experiment in Liberty, Equality, and Justice. 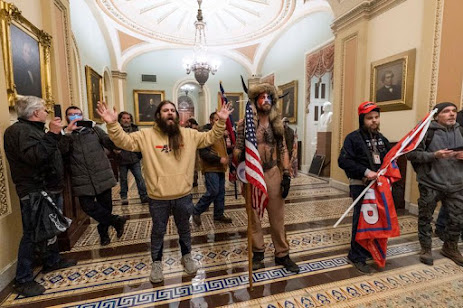