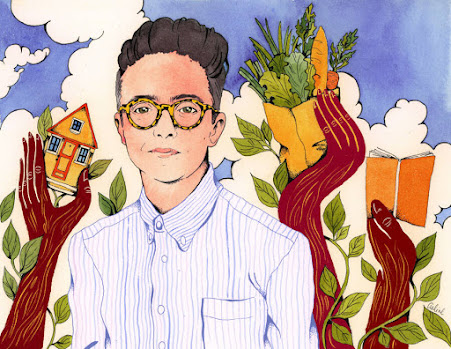 In These Times, a progressive magazine published in Chicago, ran an article in its December 2020 issue that was titled, "It's Together That We Survive Disaster." The article was, essentially, an edited transcript of a conversation held between Clara Blake Liang, an editorial intern with the magazine, based in San Francisco, and law professor and activist Dean Spade. Spade is pictured above.
Spade has a new book out, Mutual Aid: Building Solidarity During This Crisis (And the Next), and the new book was the excuse, pretty clearly, for the interview that led to the article. According to Liang's introductory material, Spade's book is "at once a theory, history and step-by-step manual on mutual aid, explaining how to radically redistribute care, avoid common organizing pitfalls and, ultimately, 'heal ourselves and the world.'"
"Healing ourselves and the world" sounds pretty good to me. In fact, it sounds like it's a kind of "must do" assignment. Spade's book may be a place to start figuring out how to accomplish the task. That word "together" in the title of Liang's article is what first caught my attention. We are in this life together, and so if there is ever going to be any effective effort to "heal the world," it will require exactly what Spade is calling for: "Mutual Aid."
Since I haven't read Spade's new book (only the review on which I am commenting here), I am not clear whether or not Spade gives any credit to Peter Kropotkin, the anarchist political thinker pictured below. Kropotkin wrote a book titled Mutual Aid in 1902, and I have read Kropotkin. I read him a long time ago, as a matter of fact, and I was and still am persuaded that mutual aid between humans has been, as Kropotkin argues, one of the forces, within evolution, that has helped advance the human race.
There are lots of helpful advisories on how individuals can prepare for potential disasters, or how they can help themselves, individually, once a disaster has occurred. That's great. Taking individual action to prepare for a potential disaster, or to react to an actual disaster, is certainly appropriate.
In the end, though, because we are in this life "together," individual efforts are not enough.
I think Spade's revisit of the idea of "Mutual Aid" is timely. Unless we can rediscover and redeploy the kind of mutual aid that Kropotkin propounded - the kind of mutual assistance and support that has made it possible for humans to survive, we are likely not going to survive the disaster in which we find ourselves now.
Read Liang's quick little article from In These Times. Then, let's see if we can't transform our politics, and transform our world, through Mutual Aid.
Image Credits:
(1) - https://inthesetimes.com/article/mutual-aid-disaster-emergency-organizing-solidarity-dean-spade-interview
(2) - https://en.wikipedia.org/wiki/Peter_Kropotkin