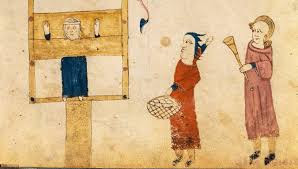 I feel certain that this saying, "turnabout is fair play," must be familiar to most of those who are reading this blog posting. The Grammarist dates the saying to the 1700's:

The phrase ... originated in reference to gaming, meaning [that] taking turns assures a fair game. At that time, turnabout was rendered as two words as in turn about. Today, the term has taken on the connotation of revenge or retaliation, in the sense of two parties taking equal advantage of each other. Occasionally, turnabout is fair play is used in a friendly, teasing manner as an admonishment to keep things fair and equal.

Setting aside the occasional use of this phrase in a "friendly, teasing manner," I'd like to focus on its use as a justification for revengeful and retaliatory actions against those who have wronged us. Let's consider the possibility of that, as we think about the behavior of our former president, Donald J. Trump, and how we will respond to his behavior, now that he is gone. Is turnabout fair play?
Shortly after his election, in 2016, The New Republic noted that Trump specialized in humiliation:

Few people know how to humiliate like Donald Trump—he told his Twitter followers to check out a sex tape; he instructed Chris Christie to stop eating Oreos and forced him to assume the role of doting butler—but even fewer take humiliation as personally as Trump does. For eleven months, the Hillary Clinton campaign—as well as almost the entire Republican establishment—waged a war against Trump by attacking and undermining his claims that he was rich and smart and had a working penis. But you have to have shame to be humiliated, and Trump lacks it completely. The only thing these attacks achieved was the inevitable retaliation.

As The New Republic observed, Trump is a master of humiliation, and during the last four years, humiliation is exactly what Trump has so often dished out to others - and in great abundance. If that "turnabout is fair play" rule applies to politics - and why wouldn't it? - shouldn't we feel more than comfortable in trying to humiliate our former president right back?
By extension, shouldn't we also feel quite comfortable in seeking to humiliate his followers, too, millions of whom have rallied to him, and to his false claim that the 2020 election was some sort of gigantic fraud. Shouldn't we, in particular, seek out ways to humiliate and pay back those elected officials (take Ted Cruz and Josh Hawley as examples) who pandered to Trump's untruths, and who helped set in motion the events of January 6th?
The idea of seeking the humiliation of our former president, and of his followers, came to me as I read a recent article in Psyche, titled, "The History of Humiliation Points to the Future of Human Dignity." The article began as follows:

Humiliation is more than an individual and subjective feeling. It is an instrument of political power, wielded with intent.

Our former president certainly used humiliation as a political weapon, and in what appears to have been a very effective manner. Surely we all remember Jeff Sessions. After that example, who would want to cross Trump? Not very many people! So, shouldn't we take a "turnabout is fair play" approach now, and give Trump and his supporters exactly the same kind of treatment the president gave to others while he was in office?
The Psyche article suggests that we should not, and the article is well worth reading in its entirety. Here's a short excerpt:

Mass opposition to the politics of humiliation began from the early 19th century in Europe, as lower-class people increasingly objected to disrespectful treatment. Servants, journeymen and factory workers alike used the language of honour and concepts of personal and social self-worth – previously monopolised by the nobility and upper-middle classes – to demand that they not be verbally and physically insulted by employers and overseers.
This social change was enabled and supported by a new type of honour that followed the invention of ‘citizens’ (rather than subjects) in democratising societies. Citizens who carried political rights and duties were also seen as possessing civic honour. Traditionally, social honour had been stratified according to status and rank, but now civic honour pertained to each and every citizen, and this helped to raise their self-esteem and self-consciousness. Consequently, humiliation, and other demonstrations of the alleged inferiority of others, was no longer considered a legitimate means by which to exert power over one’s fellow citizens (emphasis added).

I read this article yesterday, on a day that our new president called for "unity." Maybe that word, "unity," is not quite the right word - or, at least, it is not the most important word - because the divisions of thought, opinion, and circumstance in the public are profound, and real, and an appeal to something that is not widely felt or acknowledged will be unavailing.
What will heal us, ultimately, will not be an appeal to a "unity" that many don't believe exists. What will heal us, instead, will be our recognition of the dignity of every person, whoever they are, wherever they come from, whatever they believe. Using  that approach to restoring a functioning democracy will require us to do the opposite of trying to humiliate those with whom we disagree - and who are, in fact, "wrong."
This is not, really, saying anything different from what I wrote about yesterday, in my posting on "Talking With Strangers," or that I wrote about on Monday, in "Trust Me On That."
Talk and trust. That's what we need. We need to talk with those whom we believe have made a mistake - and who have made a mistake. We must trust that from such conversations can come conversion and real change. However tempting - however justified - we must try to avoid lording it over all those who have been mistaken, and wrong - Trump supporters, for instance, who don't think that "white privilege" even exists, and who are resentful and aggrieved for reasons we don't judge to be worthy. With all such persons, with everyone, we must talk as equals, and with no thought to humiliate. The opposite of humiliation is what is called for, conversations that provide no intimation that those with whom we disagree are "deplorable," or unworthy.
I am hoping that our new president, who has chosen the word "unity" to describe what I am talking about, will be a model for this kind of healing approach, an approach that aims to repair all those things that have so disproportionately divided us. The responsibility for such conversations cannot be delegated entirely to our Chief Executive. That responsibility must ultimately fall on every one of us.
We are, each one of us, as citizens, responsible for the maintenance of democratic self-government, and that requires us to treat with dignity all whose with whom we share the world, and especially those with whom we differ. That is, of course, the hard part! Despite how hard it is to turn away from the "turnabout is fair play" response to legitimate grievance, it is our responsibility to acknowledge and triumph over our differences by elevating the dignity of every other person, and by setting aside an easy recourse to the humiliation of those with whom we have disagreed, and disagree.
Image Credit:
https://psyche.co/ideas/the-history-of-humiliation-points-to-the-future-of-human-dignity