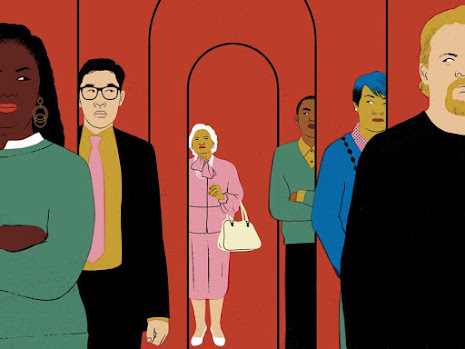 Kevin Vallier, a philosophy professor at Bowling Green State University, has written a book called Trust in a Polarized Age." I haven't read the book (let me confess that immediately), but I have read Vallier's own summary, by way of a column in The Wall Street Journal.
In the early 1970s, says Vallier, half of Americans believed that most people could be trusted. Today, fewer than one-third of Americans would say that. The United States, in fact, is the only established democracy to see a major decline in social trust, which Vallier defines as a "faith that strangers will abide by established norms."
Economic inequality is related to this lack of trust among the "strangers" who are actually our fellow citizens. Corruption and ethnic segregation also play a role, but Vallier doesn't think that corruption, ethnic segregation, and economic inequality tell the whole story. They just aren't the full explanation. He believes that one likely cause of our growing social mistrust has been political polarization, which hasn't been as well studied as those other factors:

Growing up under polarized political institutions may lead young people to generalize from partisan distrust to social distrust. Americans are sorting themselves into social silos, seldom interacting with unlike-minded others, leading to less moderation and more radicalization. This may be due in part to social media, though recent research on the effect of social media has reached mixed conclusions on this question. But the effect is clear: In 2017, around 70% of Democrats said that Donald Trump voters couldn't be trusted, and around 70% of Republicans said the same of Hillary Clinton voters...
Some measures can help. When people witness better enforcement of the law—including the protection of clearly defined property rights and less manifest nepotism and favoritism at high levels of government—social trust can rise. The U.S. can also do more to break up patterns of ethnic segregation, including cracking down on inequitable mortgage lending and adopting school vouchers, which give parents more freedom to choose where their children are educated.
But political leaders have an especially important role to play. Some research connects having a largely symbolic monarch with higher social trust, perhaps because having a widely recognized and respected nonpartisan leader gives diverse people something in common. American presidents can’t play that role, and in general American elites are heavily polarized on both sides; they disagree with and dislike one another, and arguably pass those attitudes along to the rest of us.
If our leaders can defuse this hostility, rather than creating the impression that we’re on the brink of civil war, Americans may find it easier to develop clear expectations and norms for how people should behave, rather than anticipating that their fellow citizens will deceive or oppress them.

Tomorrow, we are expecting the inauguration of a president who has made it absolutely clear that he is committed to exactly what Vallier is recommending. Our outgoing president, and his supporters, quite to the contrary, have been suggesting that we are, indeed, on "the brink of a civil war," and the events of January 6th are probably not going to help restore the "trust factor" that Vallier emphasizes is so important.
I have a lot of faith that we can learn to trust each other more, but a greater appreciation of our ultimate and final "equality" is going to be required if we want to get there. As a young man from Duluth put it, way back in 1971:

I’m just average, common too
I’m just like him, the same as you
I’m everybody’s brother and son
I ain’t different from anyone

As is so often the case, Bob Dylan is right on the mark.
There is a fundamental equality between us all. That's the truth. That's the truth that was recognized in our Declaration of Independence, and this fundamental equality between us is the essential foundation of our democratic union.
We are all equal. That's the way we have to think about each other. That's the way we have to treat each other.
Trust me on that!
Image Credit:
https://www.wsj.com/articles/why-are-americans-so-distrustful-of-each-other-11608217988