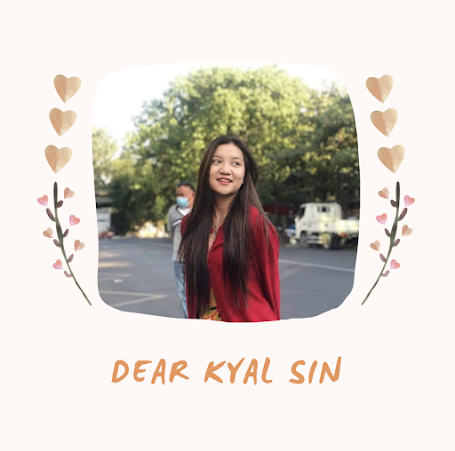 This blog posting conveys a message direct from Myanmar - a message and a poem that has come by a roundabout way to me. What I publish here, this personal writing, is from a very young woman who is there now, who is suffering, who is in danger, a very young woman (and a very brave woman) who was born in Myanmar and who aches for her country. I feel certain that readers will be as moved by her words as I have been. Her name is Nga Pi Kyaw.
For those who may have not been paying attention to events in Myanmar, there are excerpts from two New York Times articles at the end, to provide a context for what Nga Pi Kyaw is telling us.

Today is a very significant date for Myanmar. The quintuple 2 (22222) also known as the Spring Revolution marks the day where everyone in the whole country comes together to peacefully protest out on the streets against the military coup led by power hungry men who seem to have no conscience nor feel remorse for shooting unarmed civilians. Hundreds of thousands flood the streets in Yangon and likely millions nationwide, making this the biggest protest in history.

I can feel my heart swell and fill up with so much love and respect for my people, for their selflessness, their generosity, their power to show courage, love and compassion even in the face of terror. It inspires me how willing they are to give away a piece of their own, from their own hard earned money that they’ve worked day and night for even if it isn’t much.

We deserve freedom. We deserve justice. We deserve a future. And we will not concede until we get them. I believe in each and every one of us. The revolution must succeed. ❤️✊
February 28, 2021
Milk Tea Alliance Day

I always say that my dream is to be a part of the cast of Les Miserables. But today I got to live that dream. And it was horrifying. The military has intensified its crackdown on the protestors all over the nation. The streets that I used to take to go to school have now become a battlefield filled with tear gas, stun grenades and live rounds. There are students my age on the streets risking their lives to fight for their freedom. My city Yangon which used to be buzzing with street hawkers, traffic and shopping malls, is now erupting with the chants and screams of protestors behind barricades facing off the blazing guns of the military, who derive pleasure from killing the civilians. We lost 26 lives today. More than 1000 are injured. Over 200 are kidnapped. These lives are not merely just statistics. These lives meant the world to their families. They were someone’s son, someone’s sister, someone’s father, someone’s mother, someone’s teacher. While most of us can return home at the end of the day to have dinner with our families, their families will have empty chairs at their tables that will never be full again. It’s just too painful to bear. My heart breaks into a million pieces for my people. 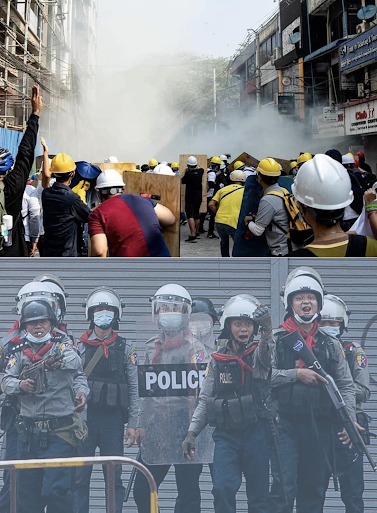 March 3, 2021
Today has been another ‘bloodiest day’ in Myanmar since the coup. 52 people in my country have been killed in one day. I worry that one day those deaths will be so normalised and become merely stats. THESE AREN’T JUST STATS! They ended the lives of 52 people. They destroyed 52 families. Those 52 people had dreams. They had plans for their futures. And now they are never coming back to life. They are never going to see their friends and families again. My phone is constantly buzzing with the news of death, death and another death. While I have somehow become numb and indifferent to the pictures of blood, gore and dead bodies, one of those pictures stood out to me. Her name was Kyal Sin. She was shot in the head with a bullet while protesting. Maybe because we were the same age, maybe because we both were girls, maybe because we both shared the same love for our families, her death felt the most real to me. Her death makes me feel guilty for being safe in my own house right now. Her death woke me up from my numbness and made me realize how wrong and vile the world is right now.

I never got to know her in real life but I’ll always wish I did.
Dear Kyal Sin,
As soon as I heard about you I looked through your profile.

You were beautiful. You liked to dance. You were only 19, bursting with so much potential and ... Life.
The relationship you had with your father was rare and beautiful; you were his love, his pride, his world — just as he was yours.

I cannot fathom the immense pain and loss he must be feeling right now. But I know this.

You were the best of us.

You did not deserve to have fallen at the hands of heartless scums like them. They had guns but you had faith. A strong, resolute and unshakable faith that can never be killed.

Thank you for fighting for us and for setting a shining example of bravery. The impact of how you fought will be felt for generations.
Your father is so proud of you. We are all so proud of you.
Rest in power, Angel.
I’m no Amanda Gorman but I felt like writing a poem.
oooOOOooo

A Poem For Kyal Sin

For our martyrs and lionhearts,
Whose blood and bravery paved the way for us;
For democracy and a better future for our sons and daughters;
And for Amay Su who goes through immeasurable sacrifices for us,
Only to smile afterwards and say it was her “choice” to do so
We fight.
Our chants and our pain stricken hearts
Echo the beating of our pots and pans
Against the filthy evil they summon
With their guns, gases and canons
And yet, with every breath and ounce of strength in our bare hands
We fight.
Until our children no longer have to face the same battles
Until our land is restored in all her beauty, pagodas and temples
Until we see justice that is long overdue, is served
And our people, although scarred and battered,
Emerge victorious and more united than ever
Until they realise that they have indeed
Messed with the wrong generation
We fight.
oooOOOooo
Surely most of those who will read this blog posting have heard at least something about what is happening in Myanmar. For those who may not know, here is the situation: The country's powerful military overthrew its democratically-elected government in a  coup d’état on February 1, 2021. An article in the March 13, 2021, edition of The New York Times, from which the picture below was taken, and a subsequent article, filed on March 14th, summarizes what has happened since the coup. The military dictatorship and its security forces are killing those in Myanmar who, like Nga Pi Kyaw, like Kyal Sin, insist that democracy must be restored.

Military leaders’ initially restrained response to the first waves of protests, civil disobedience and work stoppages has grown more forceful over time, escalating into a brutal effort to put down the movement that has so far left hundreds injured and scores dead...

The military quickly seized control of the country’s infrastructure, suspending most television broadcasts and canceling domestic and international flights.

Telephone and internet access was suspended in major cities. The stock market and commercial banks were closed, and long lines were seen outside A.T.M.s in some places. In Yangon, the country’s largest city and former capital, residents ran to markets to stock up on food and other supplies...

Weeks of relatively peaceful protests quickly turned deadly on Feb. 20 when two unarmed protesters were killed by security forces in Mandalay, one of whom was a 16-year-old boy.

The deaths preceded a general strike on Feb. 22, when millions of people across the country took to the streets.

As the demonstrations have entered their second month, the military, notorious for having crushed democracy movements in 1988 and 2007 by shooting peaceful protesters, has become more violent in its response.

Week after week, the armed forces have escalated their attacks on the demonstrators.

By the first week of March, more than 60 people had been killed, including at least 38 just on March 3...

Soldiers and police officers shot and killed at least 51 people in Myanmar over the weekend, as they pressed their campaign of attrition against protesters who have defied them in cities and towns across the country.

Despite weeks of killings by the security forces, a nationwide civil disobedience movement — which has paralyzed much of the economy as well as the government’s operations — shows no sign of waning... 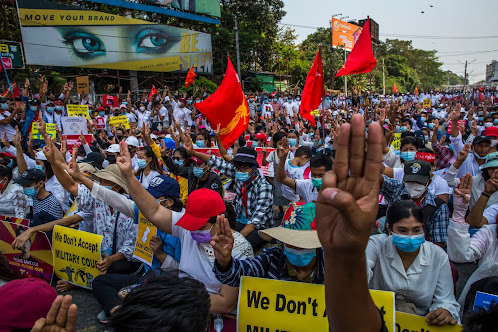