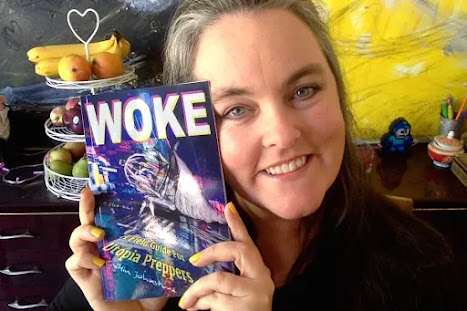 Caitlin Johnstone, pictured above, calls herself a "rogue journalist," and that seems accurate. Her online commentaries (mostly political) are generally contentious and often acerbic. Sometimes I agree with her. Sometimes, not so much.
On December 12, 2020, Johnstone wrote an article titled, "Yet Another Major Escalation In Establishment Internet Censorship." According to Johnstone, YouTube (owned by Google, which she identifies as "arguably the most powerful company on earth") decided to delete any user video that claims the US election was fraudulent.
Click here to activate the link that Johnstone provided to the YouTube statement. Below is the most pertinent part of that statement:

Yesterday was the safe harbor deadline for the U.S. Presidential election and enough states have certified their election results to determine a President-elect. Given that, we will start removing any piece of content uploaded today (or anytime after) that misleads people by alleging that widespread fraud or errors changed the outcome of the 2020 U.S. Presidential election, in line with our approach towards historical U.S. Presidential elections. For example, we will remove videos claiming that a Presidential candidate won the election due to widespread software glitches or counting errors. We will begin enforcing this policy today, and will ramp up in the weeks to come. As always, news coverage and commentary on these issues can remain on our site if there’s sufficient education, documentary, scientific or artistic context.

Johnstone is not willing to concede that there was no fraud involved in the 2020 presidential election; however, she pretty much concedes that our current president did, in fact, lose his reelection bid, and that the kind of wholesale fraud that he and his supporters have been claiming did not, in fact, take place.
That said, Johnstone is still very upset with the YouTube policy:

Even if America did not have the single most flawed election system in the entire western world (and it does), and even if it had been conclusively proven beyond a shadow of a doubt that no election fraud of any sort took place (and it hasn’t), it would still be a massive escalation beyond previous online censorship protocols to begin censoring people simply because they are wrong. People are allowed to be wrong. A free society allows people the right to voice wrong beliefs because the only alternative is creating a monolithic Ministry of Truth which has authority over what the right and wrong beliefs are.

Click the link to read Johnstone's article if you'd like the full rant. Johnstone doesn't think we should be sitting still for what she calls "the continually escalating rollout of internet censorship protocols by US government-tied Silicon Valley megacorporations."
What do you think? She's raising an important question. Do people have the right to be wrong? Well, I'm with Johnstone. I hope so!
Image Credit:
https://thedailybanter.com/2018/03/the-daily-banter-despicable-lying-scumbags/