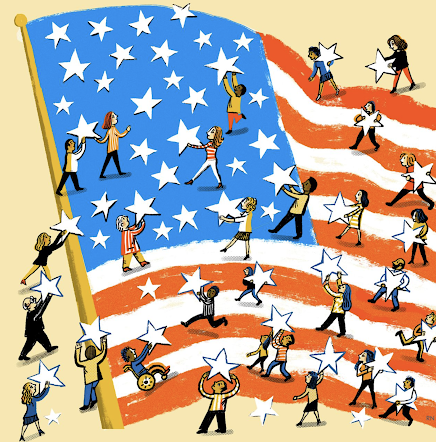 Anyone in the habit of reading my blog postings on a daily basis will realize that I have been trying to promote "federalism" as a desirable thing. Last Saturday I discovered that I am not alone. In the weekend edition of The Wall Street Journal, dated December 12-13, 2020, Gerald F. Seib, The Journal's executive Washington editor, wrote an article titled, "Far From Washington, Americans Are Finding Local Solutions." I think it's a pretty good article.
Unfortunately, Seib's article is too long to republish in its entirety in this blog posting (it's a full page and a half, though the graphics and photos do take up a lot of space). Thus, I can only hope that anyone who is reading this blog posting, and who becomes interested in what Seib has to say, will be able to slip past what I assume will be The Wall Street Journal's paywall.
The Journal, of course, is a "conservative" newspaper, and its content will thus be approached with some suspicion by those (like me) of the "progressive" persuasion. My skeptical friends will undoubtedly continue to worry that "federalism" is actually some kind of modern version of "feudalism." I have tried to refute that idea, in my blog post yesterday, but I am sure that such skepticism will remain.
I was heartened to read the following in Seib's article:

The idea of looking downstream for action and answers has long been a basic tenet of conservatives, who tend to distrust centralized power. But Robert Putnam, the former dean of the John F. Kennedy School of Government at Harvard University and a self-described “good liberal Democrat,” says that localism is increasingly embraced by those on the left as well.

“Probably 30 years ago decentralization was kind of a right-wing view,” says Mr. Putnam, who, along with Shaylyn Romney Garrett, is the author of a new book, “The Upswing,” which explores how the nation’s social and communal fabric has frayed over the decades and how it might be restored. In the 1960s, segregationists battled the federal government by invoking “states’ rights” to fend off efforts to integrate schools and other institutions, while liberals embraced centralized power as a way to force reform.
Now, says Mr. Putnam, “There’s been a change in that view on the left. Increasing numbers of people on the left also think that decentralization would be a good idea.” In the last few years, a growing number of young liberals have switched their focus from national to local politics, seeing work in their own communities as a better way to expand the stockpile of affordable housing, raise wages for low-income people and address racial tensions.

I, of course, am no longer a "young liberal," though I still do so identify. However, I think Putnam (and Seib) are right, and that we on the "progressive" side of the spectrum need to pay attention.
One of the examples that Seib cites, to show how local action can accomplish a rejuvenation of our poisoned politics, involves the city of Duluth, Minnesota. This is not only the birthplace of Bob Dylan, but is also where a number of my close friends happen to live. I'm going to have to follow up with them when I talk to them next - and I'll put the question to Dylan, too, if I ever run across him again in the streets of San Francisco, as I actually did, one time, back when I truly was a "young liberal."
Think about this Duluth thing, described below. It's an example of local action, but it is definitely not the only way that a focus on local politics, and local political action, can help solve what are now seen as almost insuperable national-level problems:

In Duluth, Minn., a city of about 85,000 on Lake Superior, community leaders were so alarmed about the tenor of public discourse that in 2003 they decided to launch a program called “Speak Your Peace: The Civility Project,” which established ground rules for those taking part in debates about local issues—a system that community leaders credit with working through difficult debates over municipal belt-tightening and a new ordinance on paid sick leave.

Since then, requests from other communities seeking to replicate the program have poured in, and Duluth leaders have shared their experience with more than 100 communities from coast to coast. “We have been especially busy in the last few years,” says Rob Karwath, former executive editor of the Duluth News Tribune and now a consultant to the Speak Your Peace project.

One community that picked up the program was the town of Sisters, Ore., which found itself several years ago falling into angry divisions as it grappled with a split between old-time residents and newer arrivals over how to handle growth. So in 2016 it adopted the Speak Your Peace format to lower the temperature.

And this year, it has found that the program has helped deal with an entirely new 2020 issue: relations between the community and law enforcement. Sisters had no desire to slip into the kind of tensions between police and community that have rocked Portland up the road. One step it took to avoid that fate was to host this month an online forum in which citizens could talk directly with local police officers.

“It was awesome,” says Amy Burgstahler, a co-founder of the Citizens4Community organization that hosted the meeting. “People were, like, ‘Wow, I’m feeling more at ease’ … It was never our goal to send a specific message. Our goal was to let people talk.”

Getting people to talk! What a concept!
There's a reason that the First Amendment comes first, you know, when you start looking at the Bill of Rights. "Talking to Others" is where all politics begins - and that kind of person-to-person political discussion, upon which our politics ultimately depends, is best accomplished, first and foremost, at the local level
Image Credit:
https://www.wsj.com/articles/far-from-washington-americans-are-finding-local-solutions-11607702344