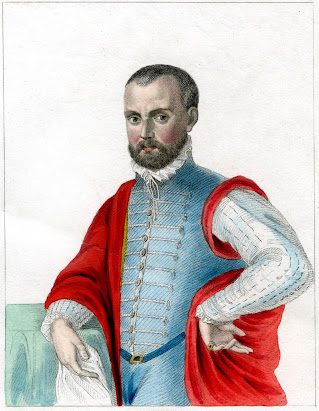 Niccolò Machiavelli is pictured above. The image comes from a book review in The New York Review of Books. The review was titled, "Whatever It Takes."
I am not, by any means, very knowledgable about Machiavelli, but I have read The Prince, which is only one of several books he wrote. The book review served mostly as a short biography, since the two books reviewed are, basically, biographies themselves. I commend the review to you for the purpose of learning more about Machiavelli and his life, especially if you (like me) have only a hazy idea of who this Machiavelli actually was.
The review, though, besides providing biographical details, does identify what the reviewer, Tim Parks, thinks was Machiavelli's uniform motivation, throughout a very complicated public life - and what the "main message" of his writings was. Parks begins with a question about Machiavelli's character - the topic that often comes up when people talk about Machiavelli:

“Is Machiavelli good, then, or is he evil?” asks the French scholar Patrick Boucheron in his discussion of The Prince, a book whose “whole program is to uncouple political action from conventional morality.” Is he advising political leaders to be treacherous, violent, and dishonest (as Diderot believed), or revealing to ordinary people the mechanisms behind their leaders’ dishonesty, violence, and treachery (as Rousseau believed)? “We would like to have an answer,” Boucheron writes, but the matter is better “set aside.” Machiavelli was simply saying “the truth about things.” Still, the question hangs in the air, if only because Boucheron’s anxiety over the deteriorating morality of politics today has him turning to the Italian for guidance.

Parks concludes by deciding that Machiavelli was, in fact, niether "good" nor "evil," but was, instead, a consistent and committed advocate for what we, today, might call "the community."

This brings us to the essence of Machiavelli’s vision and vocation. In the Discourses he had argued that Rome achieved success not despite internal conflict but by harnessing such conflict, which is natural and inevitable, in institutions that allowed each area of society to control and complement the others. The idea was controversial. Nevertheless, Machiavelli set about devising a constitution for Florence that would appease all classes, balancing Medici power with republican aspirations. It was rejected.“I have always been most loyal,” he wrote to Vettori in 1513 in relation to his willingness to serve the Medici regime. “My poverty stands witness to my loyalty and goodness.” And he means loyalty to Florence. He was a civil servant, serving regardless of regime; the Medici were hardly worse than many others. They were part of Florence’s tradition. When Machiavelli traveled it was with Florence in mind; when he considered Rome’s past it was to apply it to the Florentine present. In 1521 he was offered a lucrative job as chancellor of the city of Dubrovnik. He refused. He wasn’t a mercenary. What mattered were family, friends, particularly circles of friends, lovers, the polis. Lee’s magnificently detailed biography shows throughout what a convivial fellow he was, how important to him were such qualities as solidarity, cheerfulness, willingness to advise, and practical joking, and how easily he could move from gambling in a village inn to debating in the government palace.This concern with inclusion, colored no doubt by Machiavelli’s having grown up in a family that felt excluded, is intimately connected to his insistence that the polis constitutes the supreme value. Religion should be at the service of the community, a valuable resource to be nurtured and respected regardless of whether it was true. And Machiavelli did respect it, to the point of writing an Exhortation to Penitence for the confraternity to which he belonged. He liked to be part of things. Equally, language, at least the vernacular, was the expression of a specific community, not something that an individual could manipulate, as Dante had claimed to have manipulated Florentine to make it the language of all Italy. Dante, Machiavelli felt, was speaking from the bitterness of exile and exclusion. Lee feels this attitude is “parochial.” But the implication was that a language of all Italy would come naturally if ever Italy were united, something, as Machiavelli explained in the Discourses, that the church made extremely unlikely, since the pope occupied the territories at its center and prevented any leader from conquering the entire peninsula while being unable to conquer it himself. “When a storm is threatening” and our institutions are in crisis, Boucheron concludes his book, Machiavelli can “teach us to think in heavy weather.” He names Brexit and Trump as examples of our present crisis. Machiavelli no doubt would have been fascinated by Trump, but even more so by the circumstances and society that allowed him to be successful. And whatever he might have thought of Brexit or the American president, the slogan “Florence First” would have made sense to him.

This review made me "like" Machiavelli more than I have been inclined to like him, and to have a better opinion of him than I had before. If Parks' analysis is correct, Machiavelli was not so much  an advocate for ruthless self-interest, by either the princes or the people, but wanted those in charge of the government to make their commitment to the body politic entire, to "the community."

Without endorsing the methodologies that Machiavelli proposed for his prince, I do think that our politics must be based, as I am fond of saying, on the truth that we are "all in this together."

In an age of "princes," it appears that Machiavelli was propounding this same principle.

In an age of democratic self-government (may it long continue), we must continue to search for how this principle applies. That could be a lot of fun! 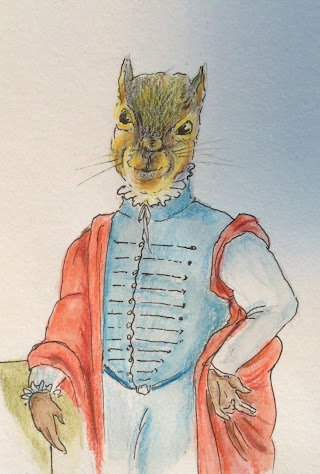