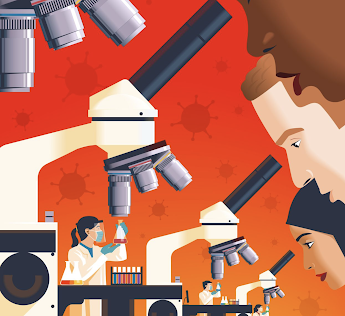 Matt Ridley, who is eligible to be addressed, formally, as "Lord Ridley," has written an interesting article in The Wall Street Journal. Ridley's article, "What the Pandemic Has Taught Us About Science," begins by quoting the renowned physicist Richard Feynman:

In a lecture at Cornell University in 1964, the physicist Richard Feynman defined the scientific method. First, you guess, he said, to a ripple of laughter. Then you compute the consequences of your guess. Then you compare those consequences with the evidence from observations or experiments. “If [your guess] disagrees with experiment, it’s wrong. In that simple statement is the key to science. It does not make a difference how beautiful the guess is, how smart you are, who made the guess or what his name is…it’s wrong.”

Ridley calls the process Feynman describes the "Guess and Test" method This is, it seems to me, an engaging way to describe what we have learned to think of as the "scientific method." As we all know, this "Guess and Test" methodology has led to discoveries upon which much of our modern world depends.
I like to think that the "World of Nature" and our human world, the "Political World," are two different spheres, in which different kinds of law apply. You can catch up with my ideas about this by reviewing the blog posting entitled, "Worldview 101." That reference is provided just in case you have not already heard way too much about my "Two Worlds Hypothesis!"
In the World of Nature, the "laws" state what will and must happen when certain conditions obtain. The "law of gravity" tells us, infallibly, what will happen when we throw a ball up in the air.
Human laws are not like that. In our human world, we make up the laws, and they do not describe what must and will happen in any particular situation; instead they are "prescriptions," not "descriptions," and they tell us what we have, collectively, decided that we want to happen. We want people to stop at red lights, but this isn't the law of gravity. People can decide not to follow the prescription, and they can run the red lights, and the consequences can be dire. Or, there may be no consequences at all.
Becoming confused about these two different kinds of law can get us into a lot of trouble. Our global warming crisis, for instance, comes from our unwillingness to conform our behavior to those physical laws that can tell us exactly what will happen as we change the composition of the atmosphere by continuing to load it with more and more carbon dioxide. It's not like running a red light. When you do that, you may escape any penalty at all. Lots of time you won't get killed, and there is often no police officer on the scene to give you a ticket, either. When we violate the laws that control the stability of our planetary climate, we are playing in a different ballpark. There is no avoiding the consequences, since physical laws determine exactly what happens when we take action in the physical world.
So, what about that "Guess and Test" approach that we use to discover the laws that govern the Natural World? What sort of relevance does the "Guess and Test" approach have in our own "Political World?"
Actually, quite a bit; at least, I think so. In the context of scientific experiment, the "Guess and Test" method is how we discover the laws that govern the physical world. In our human world, we can make up laws at will; we don't need to test them out before we enact them. The "Guess" part of the formula is applied when we enact the laws; we are "guessing" that they will work, and that these new prescriptions we are writing for ourselves will be helpful and have a positive impact on our world. The "Test" part comes after they are in force. We should observe how our laws are working in real life. What sounds like a good law, may turn out to be oppressive, or ineffective.
The point? Just as we must never think that the laws governing the natural world can be avoided, we must never think that the laws that govern our world state any kind of inevitable approach to how we have chosen to govern ourselves. We govern our political world by an ongoing experiment. We "Guess," and we enact a law. The "Test" comes when we see how it works, whether people accept it, and whether  or not it's beneficial.
If one or more of our human laws don't test out (unlike the case with the laws that govern the natural world), we can change the laws.
"Guess and Test" in the natural world is called "the scientific method."
"Guess and Test" in our human, political world is called "democratic self-government."
Or, you could say, "Political Freedom," for short!
Let's not forget that. Test results are in. We have a lot of changing that we have to do!
Image Credit:
https://www.wsj.com/articles/what-the-pandemic-has-taught-us-about-science-11602255638