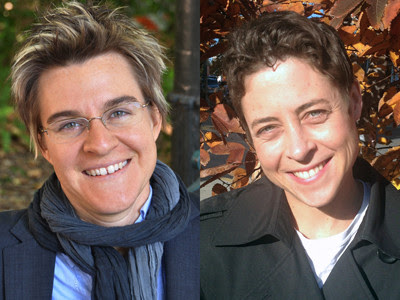 Erica Chenoweth, to the left, and Maria Stephan, to the right, are the authors of a book titled, Why Civil Resistance Works: The Strategic Logic of Non-Violent Conflict.
You can find out more about these authors, and especially about Chenoweth, from an article in The New Yorker magazine, "How to Stop a Power Grab." The article was published in the November 23, 2020 edition of The New Yorker, but was available online a week earlier. The article is obviously addressing a timely topic!
While there are still some reasonable fears that our current president and his supporters might actually try to deny and defy the 2020 election results - which would constitute that "Power Grab" in the title of the article - that seems less likely now than it did on November 4th, or even on November 16th, for that matter, which is when I read the article online, posting it, immediately, to my Facebook page, to provide a resource for those who would like to "Be Prepared," as the Boy Scouts have always advised.
I do recommend the article, and want to be clear about what I think is its central message. "Civil Resistance," which I often think of as "Civil Insistence," is not something good to know about only in a "Power Grab" situation. It is very pertinent then, of course, but "Civil Insistence" is how a self-governing society makes sure, in times of extremity or uncertainty, that, "We the People" are not only theoretically, but actually, in charge of our government, and not the other way around. As Chenoweth and Stephan document, when the people insist that this is true, and demand that the government perform on behalf of the majority, the people are usually successful - and without violence. Here's a short excerpt to give you the flavor:

Chenoweth and Stephan built a database called Nonviolent and Violent Campaigns and Outcomes, or navco. It aimed to account for every attempted revolution worldwide, between 1900 and 2006: the Carnation Revolution, in Portugal; the Blancos rebellion, in Uruguay; the Active Voices campaign, in Madagascar; and three hundred and twenty others. “I took for granted, as did all the political scientists I was familiar with, that the serious thing, the thing you do if you’re a rebel group that really wants results, is you take up arms,” Chenoweth told me. “Then I ran the numbers.” Much of Chenoweth’s career since then has consisted of interpreting and explaining what those numbers showed.

In 2011, Chenoweth and Stephan published their findings in a book called “Why Civil Resistance Works: The Strategic Logic of Nonviolent Conflict.” It included detailed narrative case studies in which the authors hypothesized about why, say, the Philippine People Power movement of 1986 achieved its goals whereas the Burmese uprising of 1988 did not. (In Burma, activists over-relied on “methods of concentration, such as election rallies and protests,” leaving themselves vulnerable to state repression. The movement in the Philippines alternated rallies with strikes and boycotts; it also drew the participation of a wide array of civil-society leaders, including clergy and teachers, many of whom eventually turned against the regime.) In the database, Chenoweth and Stephan condensed each campaign’s months or years of struggle into a binary line of code: violent or nonviolent, success or failure.

Chenoweth and Stephan selected only “maximalist” resistance campaigns—big movements, with a thousand or more participants, that sought to fundamentally alter a nation’s political order, either by seceding or by overthrowing a foreign occupier or a head of state. The American civil-rights movement of the nineteen-sixties was not included in the navco data; although there were secessionists and insurgents within the movement, its main demands were reformist, not revolutionary. Moreover, campaigns were counted as successful only if their goals were achieved within a year of peak activity, without an unrelated intervention. The Greek resistance to the Nazis was coded as a failure, because although the movement contributed to the Nazis’ retreat from Greece, Allied troops seemed to contribute more. The Indian independence movement, the popular archetype of nonviolent insurrection, was classified as a partial success—for one thing, the British did eventually quit India, but not within a year. Even taking these restrictions into account, more than half of the civil-resistance campaigns in the navco data set were successes, a much starker result than Chenoweth had anticipated. Tom Hastings, a longtime activist and scholar of nonviolence, told me, “I’ve been at this since the sixties, and I can break that time up into two periods: B.C. and A.C., Before Chenoweth and After Chenoweth. For a long time, there have been those of us who had a philosophical commitment to nonviolence, or an intuition that nonviolence puts you at a strategic advantage. Erica and Maria took that intuition and empirically proved it (emphasis added)."

We must insist on a redress of the racial injustice that has characterized this nation for its entire history. We must insist on a redress of the vast economic inequalities that have been growing, not shrinking. We must, also, make the extremely significant social, economic, and political changes necessary to fight back against the human-caused global warming that is putting our human future at risk.
Wars won't do it, violence won't do it, but we can insist that these changes be accomplished. Our insistence, if organized, will most likely be effective. That's what Chenoweth, Stephan, and their book are telling us.
So.... we had better insist. The alternatives are horrendous!
Image Credit:
http://grawemeyer.org/erica-chenoweth-and-maria-stephan/