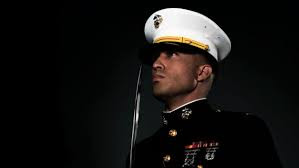 The editorial page in the November 11, 2020, edition of The New York Times included a column by Eliot Ackerman, "How Veterans See Leadership." Ackerman served in the Marine Corps for eight years, and his column presented a mnemomic which is memorized by all Marine Corps' recruits: JJ DID TIE BUCKLE. 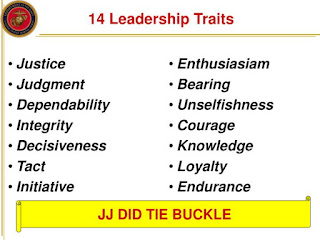 In the righthand column on the same page, Thomas Friedman, who is one of the Times' best-known pundit-columnists, added a couple of other important words to the mix: "Truth" and "Honesty."
Both Ackerman and Friedman discussed how we should be evaluating our current president, Donald J. Trump, and the results of his four-year term in our highest office. Ackerman's Marine Corps buddy told Ackerman that he never had any doubt that Trump would lose the 2020 election, since Trump did not have even one of those leadership traits identified as vital by the Marines. In other words, Ackerman's buddy had great confidence that the qualities specified in the Marine Corps' list were so generally and intuitively understood, and approved of by the citizens, that a leader without those qualities could not possibly "fool us twice." Friedman was a lot less sanguine, and he indicated his concern that the president had "dangerously normalized lying."
In both cases, the focus of the columnists was on our political "leaders." While this is definitely appropriate, I would like to suggest that we turn the spotlight on ourselves, as well. Adding on "truth" and "honesty" to the Marine Corps' list provides us with a pretty good statement of how we need to act as citizens, both individually and collectively.
If we do act that way - if we will - Friedman's fears will prove groundless, and Ackerman's buddy will be consistently vindicated. If citizens hold fast to the "JJ DID TIE BUCKLE" list, along with that Biblically-based commandment not to "bear false witness," our national politics will survive and prosper, despite our differences. If we follow those precepts, individually and collectively, our system of democratic self-government will survive all the polarizing debates and divisions that are inevitable, as we collectively try to figure out what we should do.
As between Friedman and Ackerman's Marine Corps buddy, in other words, I come down with the Marine Corps, on the more optimistic side. In many ways, this last election demonstrates that partisanship and polarized political opinion has not so eroded what we might think of as a proper set of common values that we need to be afraid that we no longer share a common commitment to truth, honesty, and all our best ideals.
Image Credits:
(1) - https://www.stack.com/a/jjdidtiebuckle
(2) - https://aminbles.blogspot.com/1979/03/