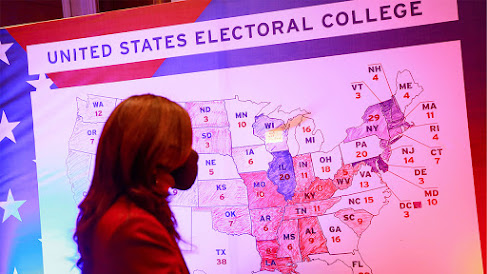 A short little column in the November 12, 2020, edition of The Wall Street Journal heretically suggests that we would be foolish to pursue what has become commonly accepted as a critically important solution to some of our greatest political problems, at least as these problems (and this proposed solution) are seen from the point of view of "liberal" or "progressive" commentators.
Steven E. Landsburg suggests (get ready for it) that it would NOT be a good idea to abolish the United States Electoral College. Because the column is so short, and because The Wall Street Journal will likely bar most non-subscribers from getting direct access, I am reproducing Landsburg's column in its entirety.
If you more or less automatically agree that the undemocratic nature of the Electoral College means that it should be abolished, think about what Landsburg says!
Our federal system is one of the most important ways we prevent autocrats from taking over the nation. We have learned, from Donald J. Trump, that there may be precious little to constrain the person filling our Chief Executive position from abusing that position, and from claiming, and actually exercising, powers that the president was never intended to have.
That said, the fact that our national government is a government of limited powers (check the Tenth Amendment for the documentation), and the fact that the primary governing powers in our system are retained by the states, is intended to prevent the kind of totalitarian takeover that people have a real reason to fear. All those elected governors, in those fifty different states, have genuine countervailing power - and since we elect them, we have that power. One of the key features of our federal system is its built-in ability to work against totalitarian government, and this is one of the main points made by Hannah Arendt in her wonderful book, On Revolution.
Let's be careful about what we wish for! Check out what Landsburg has to say:
oooOOOooo
Want a Coup? Abolish the Electoral College
Imagine the current standoff, but with the president in charge of a nationwide election.
Imagine a future presidential election in which the incumbent refuses to concede and enlists the full power of the federal government to overturn the apparent democratic outcome.
Now imagine that the election in question is actually run by a federal agency or by some nationwide quasigovernmental authority charged with collecting and aggregating the results from all 50 states.
I don’t know about you, but I might worry a bit about the pressure that could be brought to bear on that single authority. I might worry a bit about the objectivity of the attorney general and the federal election commissioners who would be in a position to ramp up that pressure.
I might even cast a sober look at what tends to happen in other countries where leaders are chosen in elections conducted by the national government—countries like Russia, where two years ago Vladimir Putin claimed 77% of the vote.
I might also be tempted to meditate on the general perils of centralizing power, and the specific perils of centralizing the power to decide who will yield power.
By then, I might be so worked up that I’ll manage to forget why the Electoral College is a threat to democracy, and how its abolition—and the nationalization of presidential elections—would help make democracy function more smoothly.
But I’ll know who to ask for a refresher. By and large, it seems like the people who are most in a dither about the current president’s attempt to retain power are the same people who think we ought to make it easier for the next president who wants to do the same thing. I’m sure they can explain that to me.
Mr. Landsburg is a professor of economics at New York’s University of Rochester and author of “Can You Outsmart an Economist?”
Image Credit:
https://wreg.com/news/here-is-how-president-trump-and-biden-could-still-tie-in-the-electoral-college/