#327 / The Politics Of Resentment, Visualized! 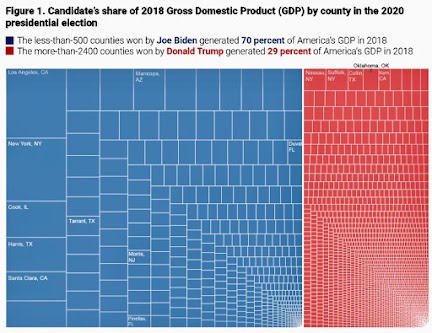 Confirmed vote totals for our 2020 presidential election are not yet fully available, but the following numbers, from an article I accessed on November 15, 2020, are pretty close.
Joe Biden received about 78,758,034 votes and Donald J. Trump received about 73,122,988 votes.
According to the Brookings Institution, in an article that was published on November 10th, Biden "won" fewer than 500 counties, nationwide. Donald Trump "won" more than 2,400 counties. So, even in winning far fewer counties than Trump, Biden still significantly outdistanced Trump in the popular vote. Biden "won" the populous urban areas. Trump "won" the less-populated rural areas. We sort of know that. The "coasts" tend to be "blue," and the rural areas in the middle of the country tend to be "red."
The chart above, from that Brookings Institution article I mentioned, gives us a little more information. Startling information! The far fewer counties won by Biden (populous, urban counties, generally) generate 70% of our nation's Gross Domestic Product (GDP). The far more numerous counties won by Trump (counties that are generally less populous and rural) only generate about 30% of GDP. You can get an easier to read version of the figure by clicking on this link.
I was stunned by the graphic, and by what it portends. We need to be able to deal with racial injustice, economic inequality and the global warming crisis that is putting our entire planet in peril. Without a truly unified effort, nationwide, I don't think we are going to be successful. Given the facts shown in the chart above, it is clear to me that we will have to redress the economic imbalance revealed by that chart as an urgent first step.
There is a lot of political resentment in our "rural" areas of relatively well-off "urban elites." That's not something that can be overcome without reducing with the economic disparities that are driving a wedge deep into the heart of our body politic.
Let's not fool ourselves. If we want a "Green New Deal," we are going to have to make sure that the "New Deal" puts some winning cards into the hands of those Americans who live in those 2,400+ counties that voted for Donald Trump.
Image Credit:
https://www.brookings.edu/blog/the-avenue/2020/11/09/biden-voting-counties-equal-70-of-americas-economy-what-does-this-mean-for-the-nations-political-economic-divide/