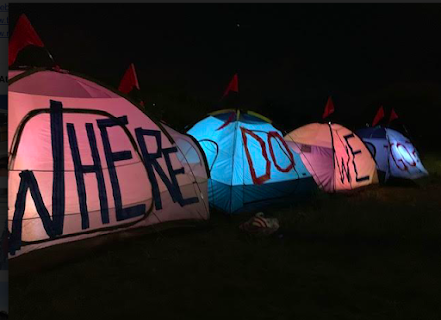 Tim Redmond has been a political and investigative reporter in San Francisco for more than thirty years. He spent much of that time as executive editor of the Bay Guardian, an alternative newspaper that ceased operations in 2014. Subsequently, Redmond founded 48 Hills, the official publication of the non-profit San Francisco Progressive Media Center.
The picture above comes from an article that Redmond published in 48 Hills on November 8, 2020. Its headline asks this question: "Where will homeless people moved out of hotels go?"

Over the next few weeks, just in time for the cold weather and rain, the city is going to start kicking homeless people out of the hotels where they were sheltered during the COVID pandemic, which has by no means ended, even in San Francisco which is doing much better than other cities.

The problem, the Mayor’s Office says, is that the federal money that was paying for much of the cost is going to run out soon (although with President Biden and Vice President Harris, who is from San Francisco, there might be more in that fund in the future).

So where, exactly, is everyone going to go? There isn’t anywhere near enough supportive housing or decent affordable SRO housing for all the people who need it. There’s no way the city can safely send people to congregate shelters again. And the mayor doesn’t want to put people in sanctioned tent encampments.

Most of the hotels where people are staying are not going have tourists again for a long time. The state has already given SF money to buy two hotels; the real answer ought to be buying the rest of them.

If every one of the 75 billionaires in San Francisco was willing to buy one hotel, then donate it to a nonprofit housing operator, we could house an awful lot of homeless people. I wonder if the mayor has even asked (emphasis added).

I was a little taken aback to learn from this article that there are 75 billionaires residing in San Francisco. The Mayor could ask them to buy those hotels, of course, but I bet she won't. That, also, is clearly what Redmond thinks. Furthermore, even if the Mayor asks them, I bet they won't pony up. Voluntary donations, as a way to address our most serious social problems, doesn't strike me as too effective - even assuming that the Mayor were willing to ask.

But think about this. Redmond's reporting demonstrates that San Francisco could, in fact, deal with a hugely difficult problem. The money is there. Our nation, similarly, could do the same. The resources are available; it's just that those resources are in the hands of the billionaires and the giant corporations.

Massive income inequality leads to social inequities that are dividing and weakening our nation. Sure, let's ask the billionaires if they are willing to contribute. It never hurts to ask. But if they all say, "no," there is another alternative.

It's time to tax!