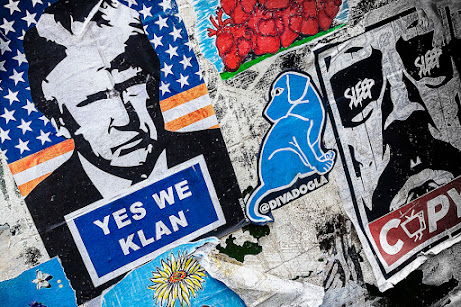 I think it would be fair to consider this blog posting as a follow-up to my blog posting yesterday.
At just about the same time I was reading what the Brookings Institution has to say about the economic disparities that are associated with the voting patterns we saw in our last presidential election, I read an article in Quillette that was titled, "America Has Serious Problems. It’s Time to Stop Blaming Them on ‘Trumpism.’" Here is a sample from the article, to give you the gist:

Quillette is not an American media outlet. Insofar as we’ve offered commentary on Donald Trump and the 2020 election, our editorial focus has been aimed at the social, cultural, technological, and academic factors that lie upstream from electoral politics more generally. To the extent our writers embrace any political agenda, they typically have opposed the centrifugal forces that are acting on western democracies—including both crude populism on the Right, and anti-liberal doctrines of race and gender on the Left. What we have observed, time and again, is that these two forces feed off each other. And to the extent anything called “Trumpism” actually exists, it will only be nourished by liberals’ insistence that the president’s appeal is rooted solely, or even primarily, in “white supremacy.” Trump rose to power on the idea that the “elites” despise the values and concerns of ordinary citizens. Even as his presidency enters its twilight, those same elites seem intent on vindicating his thesis.

Most of my friends and associates happen to be living, as I am, in one of those fewer than 500 counties that have, collectively, been producing 70% of our Gross Domestic Product. Our situation can be contrasted with those persons living in one of those many more numerous counties that have, in total, produced only 30% of our GDP. I do think it's fair to label the more fortunate of us as "elites." That is not a pretty word, admittedly, and Quillette doesn't try to soften the blow:

It is always tempting to portray one’s political opponents as consumed by some inveterate flaw or social contaminant that marks them as fallen creatures. This is a pattern that plays out on both sides of the political spectrum. And Trump himself often has demagogued whole swathes of America, sometimes lapsing into genuinely hateful language and bald-faced conspiracy theories. But ... as much as Trump enabled the worst qualities of nativist conservatives, he also brought out the most condescending and intellectually lazy tendencies of well-educated liberals. As economist Jeff Rubin recently noted, the ostensibly progressive rhetoric of upper middle class knowledge workers now bears little relevance to the hardships of impoverished Americans—of whatever race. And so pretending that America can simply be healed by curing some fictional disease called Trumpism isn’t just wrong, it’s counterproductive, because as we are already seeing, these rites of political exorcism inevitably will mean doubling down on race hustling and hashtag hectoring instead of actually addressing the problems that led to the rise of Trump ...

The Quillette article goes on to elaborate upon this theme. You are definitely invited to read it in its entirety. It is rather unsparing in its critique, and I think it makes a pretty good point.
Solidarity is what is called for now, and maintaining attitudes that can be characterized as "elitist" is not going to help. Let's hope our president-elect can help get us - all of us - to where we need to be!
Image Credit:
https://quillette.com/2020/11/09/america-has-serious-problems-its-time-to-stop-blaming-them-on-trumpism/