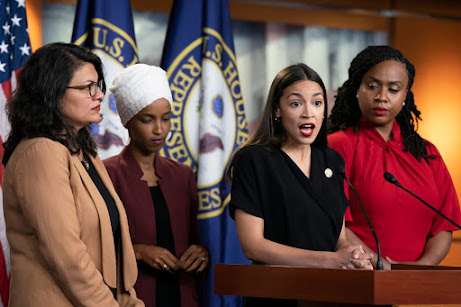 Back on October 23, 2020, prior to the election, The Wall Street Journal ran a column by Ted Van Dyk, whom The Journal identifies as the author of Heroes, Hacks and Fools: Memoirs From The Political Inside. Just to make sure that we fully understand exactly where Van Dyk comes from, The Journal further tells us that Van Dyk is someone who was "active in Democratic national policy and politics for 40 years."
Van Dyk's column was titled, "Can Biden Restrain the Democratic Party's Left?" A pull quote, printed in bold and large type, emphasized Van Dyk's main thesis:

I am pretty much in agreement with Van Dyk's judgment, as presented above. The American people, as I think the election has demonstrated, would like our president to work to unify the country, not divide it. The country is also well and truly tired of the angry polarization that has been made into an art form by Donald J. Trump. "Radical" changes are not what people voted for, either. They are hoping for "normal," for basic good government and a qualified and competent administration that makes progress on the challenges that face us, and that helps us realize our greatest opportunities.
While I largely agree with the general sentiment expressed in Van Dyk's pull quote, I do have a slight disagreement with what I think both Van Dyk and The Journal were hoping to do with this particular column. The Wall Street Journal really objects to "socialism" (as the newspaper would define it) and has no good thing to say about "The Squad," pictured above, who are known for their efforts in Congress to achieve more progressive policies - the kind of policies that The Journal calls "radical." By running the Van Dyk column, I think The Journal was hoping to persuade readers (and our next president) that the nation should pursue a policy program not unlike that supported by The Wall Street Journal itself.
In my opinion, that is not why voters elected Joe Biden instead of reelecting Donald J. Trump. I think the voters well understand that we need unity, and an end to the politics of anger and polarization that President Trump has helped promote. But I also think that the voters understand the overwhelming challenge of the pandemic, and are looking for very aggressive action by the federal government to deal with this challenge. I also think that voters want action not only on the health front, but action to make sure that our economy supports ordinary people - and not just the billionaires. I think that's what the voters expect from the Democrats and President Biden.
I also think the voters are ready, willing, and prepared to find ways to deliver on the promises made in The Declaration of Independence - the ones that say that all persons are "created equal," and that every one of us is possessed of the unalienable rights to life, liberty, and the pursuit of happiness. Some might think it would be "radical" to take real steps, right now, to end the continuing injustice whose origins are in slavery. To the contrary, I think the country is ready for steps to end racial injustice, in the arena of criminal justice, and in our economy, and in every other way possible way.
Finally, I think the American people expect our next administration to take the dramatic steps needed to reduce carbon emissions and to make what has been called a "Green New Deal" the center of a new national policy to address global warming, which is truly an existential danger to us all.
The Wall Street Journal is almost certainly not going support policies like those I just listed, but I firmly believe that the American people will. Thus, I do think that The Journal and I have a slight disagreement. We do need an end to angry polarization and divisiveness - as The Journal says - but the way to achieve unity, and to restore a common and broadly agreed-upon national purpose, is for our next president to help bring us all together to deal with massive income inequality, racial injustice, and the danger of global warming. Dealing with the global pandemic - also a priority, of course - is a good way to "warm up" for those even greater challenges.
And greater opportunities. Let's not forget that!
Image Credit:
https://www.wsj.com/articles/for-the-squad-a-split-screen-existence-in-and-out-of-congress-11563538714