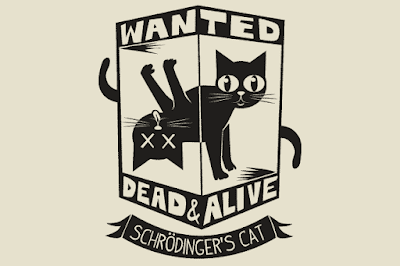 I have always enjoyed thinking about physics - not that I have ever really understood physics, of course. For one thing, there is way too much math involved!

Early on, I wanted to pursue a career in science, but that dream died in high school. I am pretty sure it was during my junior year in high school that I just about flunked out of a course called PSSC Physics. I don't remember what the "PSSC" stood for, but it was a brand new course, informed by educational reform efforts of the era. PSSC Physics was way beyond my scope. I didn't do too well at the brand-new and reformed version of math they introduced that year, either.

In college, a couple of my best friends were physics students who went on to pursue graduate degrees. I waved goodbye to my friends, and to physics, when I went off to law school, but I have always been a "wannabe." That's why I read non-technical articles about physics when they come to my attention.

On Sunday, June 28, 2020, an article in The New York Times Magazine did come to my attention. In the hard copy version, the article was titled: "The Quantum Mechanic," with this additional information provided on the title page: "For a century, quantum theory has reigned as physics orthodoxy. The Italian physicist Angelo Bassi is certain that it is not the full story - and that experiments will finally prove it."

Online - and I have provided a link - the article is called, "The Rebel Physicist on the Hunt for a Better Story Than Quantum Mechanics." I recommend the article to those with any kind of interest in physics, at all.

Bassi (and he is in agreement with Einstein on this point) believes that there is an objective reality that is independent of human activity and measurement, and that it will be possible for human beings, someday, to use human language clearly to describe that reality. Perhaps surprisingly (for those who don't follow non-scientific articles about physics), this is a distinctly minority view:

The standard take on quantum mechanics suggests ... that a complete understanding of even the objective, physical world is beyond science’s reach, since it’s impossible to translate into words how the theory’s math relates to the world we live in.

Bassi, a 47-year-old theoretical physicist at the University of Trieste, in northeastern Italy, is prominent among a tiny minority of rebels in the discipline who reject this conclusion.

I have very mixed feelings about the debate that is discussed in this article. I have read about it quite a bit, in other articles, though I doubt that I have ever fully understood what I have read. Still, I hope that I do understand at least the broad contours of the arguments on each side.

First, how could I ever think that Einstein might be fundamentally wrong about the nature of the physical universe? The article quotes Einstein as "pointedly asking one colleague if he truly believed that the moon wasn’t there when no one was looking." I think it's there! Whether we look at it or not.

On the other hand, the predictive powers of Quantum Physics are impressive, and there is something I like, philosophically, about the idea that the ultimate nature of the Natural World (the world that we do not create) is beyond our ability ever fully to describe, and that the realities that we observe in the Natural World (including cats, alive or dead) depend in some fundamental way on our own observations.

I think, perhaps because I don't really understand physics, that I come down firmly on both sides of the debate. There IS an objective physical reality, the Natural World, which exists independently of our examination and description. However, the Creation is a mystery, and our presence in it is one of the greatest mysteries of all. To know everything about it would be the key to control it, and that's why we keep trying to acquire some sort of final and definitive knowledge about the structure of the Natural World and how that world works.

While our human impulse to control everything is well known (with that impulse having many positive features), it is my opinion that we should devote our main efforts to creating and controlling the "human world" that is totally subject to our human actions, and that our role with the World of Nature should be mainly to "wonder" at that world, and to seek to understand it in the service of wonder, and not as a means to make that world susceptible to our technical command.

But as I say, maybe I don't really understand what the physicists are talking about, and what they are trying to achieve. It seems to me that what we know, so far, indicates that we are, truly, "entangled" in a reality that is beyond our ultimate knowing.

If that is true, and I think it really is true, I think that's the way it's supposed to be.