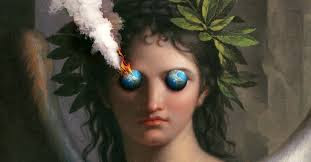 A historian believes he has discovered iron laws that predict the rise and fall of societies. He has bad news.

The statement above is a subheadline on an article by Graeme Wood, published in the December 2020, online edition of The Atlantic. Wood's article is titled, "Can History Predict The Future? The Next Decade Could Be Even Worse."
Well, the next decade could certainly be worse, no doubt about that, bad as the last one may have been. However, maybe the next decade could be better, too. Any chance of that?
Wood tells us about Peter Turchin, whom he calls "one of the world’s experts on pine beetles - and possibly also on human beings." Wikipedia identifies Turchin as a Russian-American scientist and as a professor at the University of Connecticut in the Department of Ecology and Evolutionary Biology, as well as in the Department of Anthropology and in the Department of Mathematics. He is also a director of the Evolution Institute. Turchin specializes in cultural evolution and cliodynamics — mathematical modeling and statistical analysis of the dynamics of historical societies.
Reportedly, Turchin was reluctant to meet with Wood because of the pandemic, but he also apparently told Wood that talking to him would probably "not have much value anyway, [since] his mathematical models could already tell me everything I needed to know."
What do Tuchin's mathematical models tell us? If you can get access to the article in The Atlantic, you will be able to read an extended discussion about just this topic. In short, Turchin uses mathematical models to predict history, and these models are telling him (and us) that:

Key social and political trends portend an “age of discord,” civil unrest and carnage worse than most Americans have experienced. In 2010, [Turchin] predicted that the unrest would get serious around 2020, and that it wouldn’t let up until those social and political trends reversed. Havoc at the level of the late 1960s and early ’70s is the best-case scenario; all-out civil war is the worst.

The use of the word "carnage" rings a bell, at least for me. If you remember President Trump's Inaugural Address, in 2017, the new president advised the nation as follows (emphasis added):

Americans want great schools for their children, safe neighborhoods for their families, and good jobs for themselves. These are the just and reasonable demands of a righteous public.
But for too many of our citizens, a different reality exists: Mothers and children trapped in poverty in our inner cities; rusted-out factories scattered like tombstones across the landscape of our nation; an education system, flush with cash, but which leaves our young and beautiful students deprived of knowledge; and the crime and gangs and drugs that have stolen too many lives and robbed our country of so much unrealized potential.
This American carnage stops right here and stops right now.

Turchin is on to something (and so was President Trump). Economic and social divisions within the United States have been growing for decades. Naturally, conflicts arise out of such conditions, and unless resolved such conflicts get worse, and there is no automatic mechanism of self-correction. This pattern of social and economic division leading to major societal conflict is true not only for our society, but can be shown to have been true for past societies and civilizations, too. Turchin has used mathematical models to amalgamate and quantify past historical experience, and the results of his work alert us to the fact that we have a serious problem - the "bad news" that Wood tells us about in his subheadline.
Of course, plain old observation - you know, just looking out the window - could give us the same information. No mathematical models required.
There is a big difference between "science" and what we call "social science." Insofar as "science" is aimed at obtaining knowledge of the physical universe, and how it works (and that is the usual understanding), science can find "laws" that will, in fact, predict the future - the future of the physical world, or as I often call it, the "Natural World," or the "World of Nature." The "laws" that pertain in our world - our "human world," our "political world" - are of a quite different character. Rather than being infallible descriptions of what must and will happen under certain conditions, our human "laws" are prescriptions, by which we tell ourselves what we believe we should do.
There are no "iron laws" of human history. There are conditions (like those which Turchin and Wood have documented) and then there is action by human beings, and it is our actions that determine what we will do, both individually and collectively, and our actions then determine what will happen. Our choices are manifold and multiple. It is our human freedom, not physical necessity, that establishes our human laws. What we choose to do, what actions we decide to take, is what will determine the future.
After the Great Depression, in which economic and social crisis threatened to tear this country apart, the American people determined, as a result of their political action, to create a "New Deal" for the citizens and residents of the United States. The "game" then in play would be shut down. The cards would be reshuffled, and dealt again, and we would then return to playing the game after that "New Deal" was accomplished. The results that we obtained were the opposite of what Turchin's "iron laws" would have suggested was inevitable. The fact that we soon had a common project to bind us together, saving the world from Nazi domination, undoubtedly helped focus our efforts on a common purpose that ultimately made America the richest and, some think, the most successful nation in the history of the world.
The president's Inaugural Address in 2017 was more on target than many might have been willing to admit. We were (and are) heading for the kind of crisis that Turchin predicts. Given this, I have concluded as follows:
Based on where we are, and where we seem to be heading, it is time for another New Deal.
We need, once again, to reshuffle the deck, giving those at the bottom of the economic ladder, and those who have been hampered by two centuries plus of racial injustice, a way to climb up and out of the hole in which they have been trapped. And we do have a world class crisis to bring us together, too. We must transform our world to avoid the coming catastrophe caused by our own, human-generated global warming.
No "iron laws" can stop us from changing, if we are willing to change. I hope we are willing. I think it's time for another "New Deal." Let's call it a "Green New Deal!"
Inauguration Day 2020 would be a perfect time to call in the current deck and reshuffle the cards!
Image Credit:
https://www.theatlantic.com/magazine/archive/2020/12/can-history-predict-future/616993/