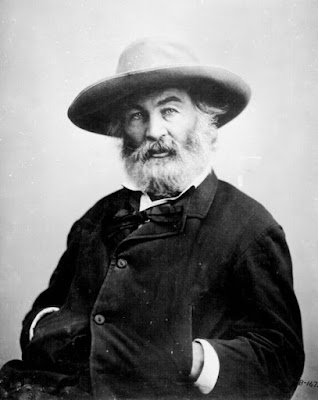 I really like Maria Popova, who is a Bulgarian-born, American-based writer of literary and arts commentary and cultural criticism. Popova writes a blog, Brainpickings, which is always worth reading. You can subscribe for free - though contributions are, of course, welcome! If you are seriously interested in thinking about the world - or the "two worlds" I talk about, the "World of Nature" and the "Political World" that we create for ourselves, which is the world in which we most immediately reside - then I advise signing up for the Brainpickings blog.

Popova, like so many public intellectuals, lives in New York City, and she has created there what amounts to an annual cultural "event," now in its fourth year, by gathering together a number of artists who do readings "celebrating science and nature through poetry." Popova calls this gathering of poets with a purpose, poets with an assigned topic, "The Universe in Verse." I remember being captured entirely by a web-based, live presentation, a year or so ago, which I found out about, of course, by subscribing to Brainpickings.

I did not, actually, start out this blog posting thinking that my purpose was to publicize Brainpickings, or Maria Popova, or "The Universe in Verse." Walt Whitman's picture appears above because that picture appeared, first, in the edition of Brainpickings that I received on March 8, 2020. That particular edition was focused on Whitman's feminism:

Whitman threw himself at righting — naturalizing — the gender imbalance of democracy not despite his maleness but precisely because of it. At the heart of his devotion to equality was an astute insight into the paradox of power: the understanding that no socially and politically marginalized group — not even a biological majority — moves to the center solely by its own efforts; it takes a gravitational pull by those kindred to the cause who are already in relative positions of power or privilege. It was a countercultural understanding in his time, and remains a countercultural understanding in ours, its negation ahistorical: Citizens helped immigrants obtain legal rights and protections; white women like astronomer Maria Mitchell and literary titan Margaret Fuller were on the ideological front-lines of abolition, some even on the literal front-lines of the Civil War.

This observation is worth taking seriously. Extremely seriously! And here is something that Popova said that I want to pass on. In her discussion of Whitman's feminism, Popova talks also about Whitman's thoughts about democracy, and this is a phrase which struck me:

He took it upon himself, a century and a half before his society did, to save democracy from politics, standing up for the rightful balance of dignity and power.

Save democracy from politics!

Considering what "politics" has come to designate, this is an appropriate assignment in these parlous and perilous times!