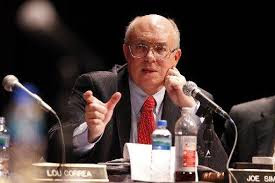 Picured above is Joe Simitian. Joe is currently a member of the Santa Clara County Board of Supervisors. Previously, Joe served in the California State Senate, where he represented a large part of Santa Cruz County.
Every year, at just about this time, Joe does a big fundraiser that takes the form of a "Community Conversation." Joe assembles a cast of three or four knowledgeable persons, and then talks with them about an important issue of the day. This conversation takes place in front of an audience of several hundred constituents and supporters. Yes, you do have to pay money to attend (it is a fundraiser), but it's worth the price. I have attended these events for years, and have found them to be an inspiring example of what "politics" is supposed to be all about.
Naturally, I liked being there in person, driving over on a weekend to my old home town, Palo Alto, where these events are held. Such gatherings are not possible, of course, in the time of the coronavirus, but the "virtual" event I attended last Sunday, November 8, 2020, was still pretty good. Joe's guests were: (1) California Secretary of State Alex Padilla; (2) Michigan Governor Jennifer Granholm, and (3) Stuart Stevens, a former political consultant whose career, until recently, found him working exclusively for Republican Party candidates.
After the 2016 presidential election. Stevens determined that the Republican Party had no principles he could support, and he wrote a book about it. His book is titled, It Was All A Lie. Stevens now identifies as a Democrat, and played a leadership role in "The Lincoln Project," which used sophisticated political advertising techniques to oppose President Trump in the campaign that is just now coming to an end. The topic that Joe and his three guests addressed during this year's "Community Conversation" was "What Just Happened? And What Happens Next?" I have put a copy of the event flyer at the bottom of this blog posting.
In general, all Joe's guests were incredibly optimistic that our country can, and will, address the challenges ahead, and that we will "pull together" to do so. No one on the panel forecast a future of paralyzing polarization and division, which was a pretty reassuring message for those who might be worried about just the opposite.
I thought Stuart Stevens had the best line of the day, as he talked about his own positive outlook, and as he made the argument that we should all share the positive perspective he advocates. We do make the future, after all, by what we choose to do, and by the actions we take, and we don't have to contemplate our future in a state of paralyzing dread, as if we were just observers who must simply wait for what will inevitably happen to us, and as if doom is the story of our future foretold. Here is how Stuart Stevens put it:
Be for the future. It is going to happen anyway! 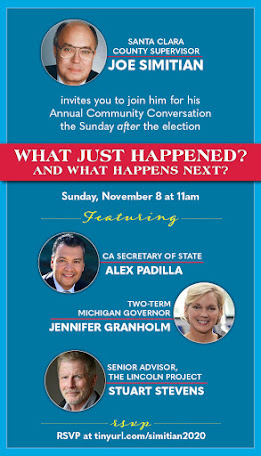