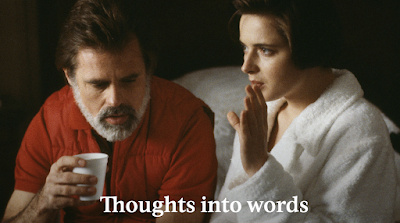 Eli Alshanetsky is an Assistant Professor of Philosophy at Temple University. He has written a book titled, Articulating a Thought. I haven't read Alshanetsky's book. However, I have read an article published by Aeon, edited by Sam Dresser, that I believe presents a fair statement of Alshanetsky's argument. The Aeon article is  titled, "Thoughts Into Words."

A central question addressed by Alshanetsky is one that is quite familiar to me: What comes first, an idea, or the words by which the idea is articulated?

The first observation is that articulating our thoughts, in the hard cases, is our way of discovering what we are thinking. The philosopher Daniel Dennett in 1991 quoted E M Forster’s quip "How do I know what I think until I see what I say?", affirming that "we often do discover what we think … by reflecting on what we find ourselves saying."

Much of the Aeon article seems focused on the problems that can ensue if a person decides to use the "I will know what I think after I have said it" methodology as some kind of an absolute guide to what that person thinks and believes. As we must all certainly admit, sometimes we say things, out of anger or some other emotion, that turn out not to be a "true" statement of what we genuinely think.

The teenager who tells his parents, "I hate you," could certainly be a good example.

In other words, returning to Forster's "quip," it is important to remember that we need to "reflect" on what we find ourselves saying, if we want to discover what we truly think. That said, I continue to believe that the best method for me to find out what I think about something is to "say" what I think, or to write it out.  That's how I discover what I believe. Again, however, reflecting upon what I have said is a necessary corollary. Continued reflection, over time, can even lead to a complete reversal of "what I think," but the process begins with me putting it out there, saying it, writing it down.

My blog postings are my way of "thinking" about issues that seem important to me. Writing down what I think, and then reading and revising, gets me to a place in which I feel confident that I do, actually, know what I think.

This is the discipline that provides a formula for a successful confrontation with the bafffling realities that surround us:

1. Say what you think


That's what I think!