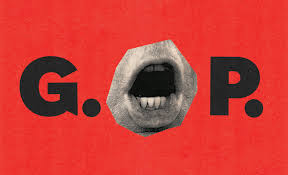 The article I discussed yesterday, from the November 1, 2020 edition of The New York Times Magazine, addressed how Donald Trump's presidency has affected the Republican Party and its long-time supporters. That article wasn't the only such article in that edition of the magazine.
"In His Image," by Elaina Plott, also ran in the magazine on November 1, 2020. If you can penetrate The Times' paywall, it's an article worth reading. Plott's thesis - based on interviews with what might be called "grassroots" Republican Party officials, operating at the local level - is that whatever the outcome of the November 3, 2020 election (which was then in the future), "the Republican Party is now Donald Trump's party."
If Plott is right (and her article is persuasive), the Republican Party is no longer interested, as a party, in trying to find "conservative" approaches to the significant economic, environmental, and social challenges confronting the nation. The Republicans just want to dominate the other side, having adopted, as it were, the president's personality characteristics as the party's political platform:

Are you willing to go to Washington and not cabal with the other side? Because they [Republican voters] want somebody, above all, that’s going to fight the Democrats. They actually don’t really care often what you’re fighting about.”
Marc Hetherington, a political-science professor at the University of North Carolina at Chapel Hill, says this is where efforts to “refine” Trumpism will very likely hit a wall, as they implicitly assume that Trump’s supporters see his “aggressiveness” as a distraction from his appeal rather than a key feature of it.

Hetherington and his colleagues are in the early stages of research that suggests Trump’s most salient contribution to the party is in many ways apolitical. They’ve found that those who agree that only fighters are successful in life, or that the best strategy is to play hardball, even if it means being unfair, tend to prefer Donald Trump, while those who agree with statements like “cooperation is the key to success” tend to prefer Mitt Romney. “It’s not a partisan thing at all,” Hetherington told me. “It’s a worldview thing. And now, there’s a constituency in the Republican Party for that (emphasis added).”

For our government to be successful in dealing with the incredible challenges we face (a global pandemic that doesn't seem to be going away, the need radically to change our 200+ year old patterns of systematic racial injustice, the threat of nuclear war, the daunting economic and social inequality that is making it ever more difficult for ordinary working families to survive, much less prosper, and the global warming crisis that in putting human civilization in direct peril) we need to recognize that we are "all in this together." More than merely "recognizing" this fact, we must "realize" it as an operational principle that can serve as a foundation for all we do.
You know, that's a "worldview thing," too, and that is the only worldview that will allow us to survive as a free and democratic society.
Image Credit:
https://www.nytimes.com/issue/magazine/2020/10/30/the-11120-issue