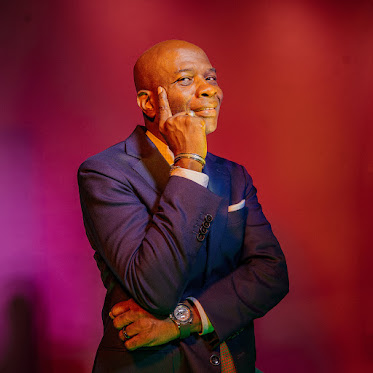 Pictured is Armstrong Williams. As Wikipedia tells us, Williams  is an American political commentator, entrepreneur, author, and talk show host, and he writes a nationally syndicated conservative newspaper column. Williams has formerly hosted a daily radio show, and he currently hosts a nationally syndicated television program called The Armstrong Williams Show.
The New York Times Magazine article from which I obtained the picture above was published on November 1, 2020. That article ran under the following headline: "He’s a G.O.P. Insider and Trump’s Friend. He Says Vote Your Conscience."
Good advice!
Though my politics don't much synchronize with Williams' politics, he did make one statement in the article that I think is worth passing on - particularly since Williams' remark has relevance to members of both of our major political parties - to Democrats and not just to Republicans:

Our political institutions, including our government itself, belong to us. The government is our government, and we need to cultivate our sense of ownership and proprietorship, since the government so often ignores what ordinary people want and deserve. Nothing is going to change that without our own, personal involvement.
What goes for the government, of course, also goes for the political parties that have come to play such a central role in deciding what our government does. Those parties belong to their members. That means we need to insist that our elected officials take directions from us, not the other way around. Having had some contact with the Democratic National Committee in 2016, when I was a delegate for Bernie Sanders, I have some personal experience that convinces me that ordinary Democratic voters need to change how that party acts. Post election, it is urgent that we not lose sight of that. Williams has the right attitude:
We don't belong to our political party (whichever party it is). Our party belongs to us!
Let's make sure that the party to which we belong does a good job moving the agenda we care about - not what the party dealmakers decide!
Image Credit:
https://www.nytimes.com/interactive/2020/10/26/magazine/armstrong-williams-interview.html