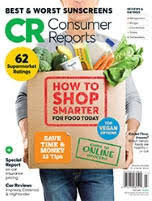 I think Consumer Reports is a fine magazine. I certainly have nothing against the magazine, and I don't have anything against the nonprofit organization that publishes it, either. Advice on "how to shop smarter for food," for instance, is definitely advice worth having.

This said, I have never personally wanted to subscribe to the magazine. On the pragmatic side, I simply don't consume enough to make a monthly advisory on how and what to consume of any particular value to me. On a more "philosophical" level, there is a real tendency for people to see themselves, first and foremost, as "consumers," and I want to make sure that I don't fall into that trap. Even granted that our political life can be positively influenced by mobilizing around consumer power, I think the right category for us, in our political engagements,  should be our self-identification as "citizens," not as "consumers."

This came to mind, a while ago, when I started getting copies of Consumer Reports in my mailbox. I glanced at the magazines and then recycled them. The magazines, however, were soon followed by a small blizzard of billings, demanding that I pay for the magazines I had been receiving. Just as a piece of legal advice, if you receive something that was completely unsolicited, even if it is something of value, you are under no obligation to communicate with whomever sent it to you, and you are under no obligation to return it. However, because I am such a nice person, I did let the magazine know that I had never subscribed to the magazine, and that I didn't want the magazine. Spent my own postage stamp money to do that, too.

Having this experience led me to the thought I shared in the second paragraph of this blog posting. There is a temptation to think that since we are all "consumers" (in other words, since we do consume things - and often a lot of things), our interaction with society and the economy should be anchored in our "consumer" role. My view  is that this would be a mistake. I continue to assert that "we live in a political world," and that every aspect of our existence is mediated by "politics," by how we decide, after deliberation and debate, to arrange our mutual affairs. Our "consumption" (of which most of us should probably be doing a lot less) isn't the most important thing. What is important is our civic and political engagement with others. "Citizen" is the correct category for me!

That thought, of course, then leads to this thought: Maybe what we need is a Citizens Report magazine, telling us how to be most effective. Maybe it would help. There is no doubt that we need to step up our game!