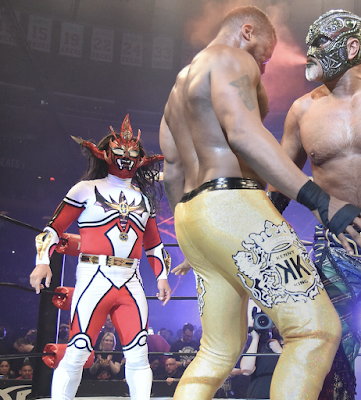 What can professional wrestling teach us about the quest for Truth? Truth with a capital "T," that is. My immediate inclination is to say, "absolutely nothing." However, maybe there is some connection, after all.

If you would like to explore this topic, let me direct you to an article published in Psyche, an online magazine. Click right here to see what Douglas Edwards has to say about how Truth and professional wrestling relate.

Edwards is an Assistant Professor of philosophy at Utica College in New York. He is the author of The Metaphysics of Truth and is also the editor of Truth: A Contemporary Reader. Edwards is also, as it turns out, a big fan of professional wrestling. His most recent book is devoted to the connection between Truth and professional wrestling, and he calls the book Philosophy Smackdown.

Having now read the article in Psyche, I am happy to report that I have learned a new word, "kayfabe," which is pronounced to rhyme with the phrase, "hey, babe." "Kayfabe" is a pro wrestling term that does, indeed, indicate that professional wrestling is a spectacle that has a very distinct relationship to Truth.

Here is how this point is made in the article in Psyche:

Fans want to be given the appearance, the show, and then enjoy speculating about what’s really going on. If the reality were simply laid out for all to see all the time, it wouldn’t be interesting – you want the flicker of mismatch between appearance and reality, as that is what stimulates us to investigate.

The same goes in other parts of life too, particularly philosophy. If the nature of the world, or ourselves, were open, unhidden, would we really care so much? Aristotle said that philosophy begins in wonder – but for there to be wonder, there need to be things to wonder about. There need to be puzzles, riddles and hidden realities, questions about the relationship between appearances and reality. This is especially powerful when we consider that most philosophical problems haven’t been categorically solved despite thousands of years of enquiry, and the lack of agreed-upon solutions makes the subject only more interesting.

Philosophers, like pro wrestling fans, are happiest when they don’t know everything, and that’s a good thing.

In sum, to the extent that Edwards believes that his insights have relevance for all of us, and not just for "philosophers," Edwards is suggesting that we don't, really, want to know the "Truth" about our actual situation at all. Instead, we want a "constructed" reality that presents us with a pleasing tableaux, though we are also stimulated by the knowledge that something else may actually be going on, behind the scenes, and that the "kayfabe" presented to us (and upon which we insist), isn't, probably, the whole story.

That observation does ring true. Most of the time, it does appear that we actually want to be presented with a "constructed" version of reality, and that we have a hard time getting ourselves to face the genuine truth behind the facade - behind the "kayfabe" - we so ardently accept.

Whatever the "philosophers" think about the desirability of this, I am more interested in those whom we call "citizens," since we are all in that category. My own thought is that we will go dangerously astray if we truly demand "kayfabe," and insist on that, instead of making ourselves penetrate through to the actual facts, to the actual "Truth."

Kayfabe fever? I am not in favor!