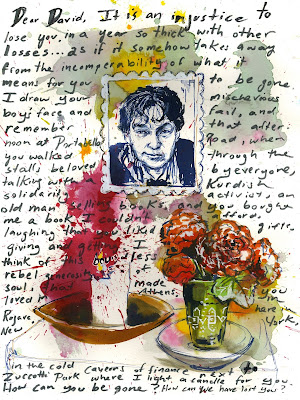 The New York Review of Books sends out a periodic email newsletter. A recent edition of the newsletter referenced an article in the NYR Daily that celebrated the life of David Graeber.

Graeber, who was an American anthropologist, anarchist activist, and author, was born in 1961 (the year I graduated from high school). He died on September 2, 2020 (way too young).  The NYR Daily article provided a long set of tributes to him, published online. These are personal stories, and will be of particular interest to anyone who closely followed his career.

Graeber was a leading figure in the Occupy Wall Street movement, and is sometimes credited with having coined the slogan "we are the 99%." I was most struck by what the NYR email newsletter had to say about Graeber:

Last December, Graeber first contributed to the Review with “Against Economics,” in which he argued that the basic assumptions on which the discipline of economics is understood and taught are false, “designed to solve another century’s problems."

This understanding of economics as a social science, not a law of physics, and one subject to the manipulations of power, was central to Graeber’s work, exemplified in his 2011, best-selling Debt: The First 5,000 Years, which exposed the historical contingency—and false morality—of debt (emphasis added).

Economists do seem to wield immense "intellectual authority" - and without any particular justification.  If economists receive way too much deference fromt the rest of us, I think it is because they are implicitly claiming that economists have access to knowledge that is akin to the "laws of physics." The laws of physics, as we all know, describe what must and will happen in the world, but such laws apply only to the physical universe, the World of Nature, and not to anything within our own human world.

Economics, in fact, is a  "social science," not some species of "natural science." That means that there are no inevitabilities.

Graeber thought that the massive income inequality that has so poisoned our politics, and that has so diminished the ability of disadvanted men and women to contribute their talents to the common world, was something we could change. Income inequality, in other words, is not some inevitable fact of life, stemming from the "laws" of economics. Like everything else within our human world, economic inequality is the product of political choices and political actions.

If Graeber was "against economics," what that means is that he was against any claim that "economics" charts inevitabilities, and that our current realities are beyond human decision.

Graeber was absolutely right to reject any such claim. Let's not be bemused by so-called "economic laws." Let's create a world that will support and reward us all.