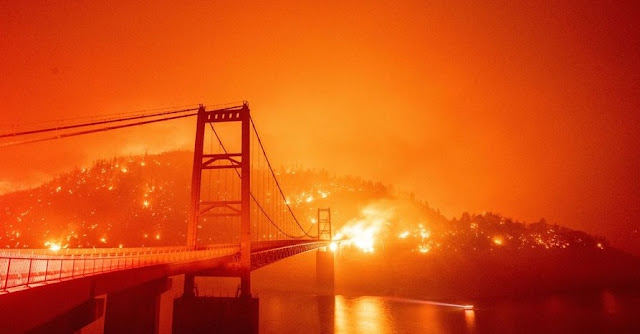 The image above appeared on my Facebook Timeline on September 10, 2020. The image accompanied an article published on Heated, a blog that addresses our worldwide, global warming emergency. The article from the Heated blog was titled, "Fire, fire, everywhere."

Several Facebook Friends commented on this posting of the article from Heated. One said, "Climate comeuppance." Another said, "Time for drastic action!"

In response to that "time for drastic action" comment, another Facebook Friend said something that I believe is exactly correct. This friend is an activist who spends a very significant part of her time working to organize at the local level, seeking to move our local community towards a more active and effective response to the global warming crisis that is affecting everyone in the world.

My friend's response to that "time for drastic action" plea was this:

We have, as we are hopefully beginning truly to realize, created accelerating conditions of global warming that are going to consume and destroy the entire human world. Fires, floods, droughts, hurricanes, derechos, species extinctions, and crop failures are already outpacing our ability to maintain a stable human world. And things are going to get worse, not better. This is only a "partial list." Faced with this global emergency, we do need to take "every action possible," but we are not even coming close.

California government pats itself on the back for its "leadership role" in efforts to reduce greenhouse gas emissions. Local communities, like my own, have adopted "Climate Action Plans," and the fact that such "plans" have been ratified by local elected leaders is treated as if the plans, themselves, were actions. Of course, they're not!

On the statewide level, California's elected officials celebrate the state's so-called "Cap and Trade" program. This is a program that is supposed to be mobilizing the "magic of the market" to reduce global warming emissions in the most "efficient" way possible.

Here is how that "Cap and Trade" program is (supposed) to work: Knowing that we must reduce global warming emissions, the State sets, each year, a "cap" on the total amount of global warming emissions that will be allowed, and this "cap" is supposed to be tightened up each year. Each year, the state government is then supposed to make sure that greenhouse gas emitters, collectively, stay below the cap. Industries that emit greenhouse gases can purchase emission credits, which allow such industries to continue to release greenhouse gases that could otherwise be controlled. Instead of reducing their emissions, which they could do, the industries simply buy emission credits, with the state then (supposedly) using the monies to reduce emissions some other way.

That's it! That's the "magic of the market." Here's what younger activists might say to that: "I call BS!"

The state's largest single use of "Cap and Trade" monies in California is to fund construction of the state's proposed High-Speed Rail system. Supposedly (when completed), high-speed rail will reduce vehicle emissions. However, producing the cement used in construction, and other construction activities, create huge amounts of greenhouse gas emissions, so that it would take seventy years before there started to be a net positive impact. And that presumes that the system is actually completed and put into operation. Unfortunately, that's not likely! The proposed high-speed rail system is a complete boondoggle, as is now commonly admitted, and it will almost certainly never be completed, with high-speed train operation as initially proposed. The San Jose Mercury has called the project a "fraud."

Another great idea is that the state should use "Cap and Trade" monies (generated when they let industry off the hook, and don't make them reduce their emissions) to purchase forest lands, permanently to protect them as carbon sinks, and oxygen generators.

They're doing that, but then (oh dang it), massive wildfires wipe out those gains.

The fact is, we should, individually and collectively, do exactly what my Facebook Friend says: take "every action possible" to reduce greenhouse gas emissions.

On a more local level, PV solar collectors should be installed everywhere they can be installed. Find the way to make it possible. Take EVERY action.

There are many, many more ways we could reduce global warming emissions if we took the "every action possible" approach.

So, here's the real question: Are we actually willing to change what we are doing now to prevent the ultimate destruction of our human world? My personal response is clear: