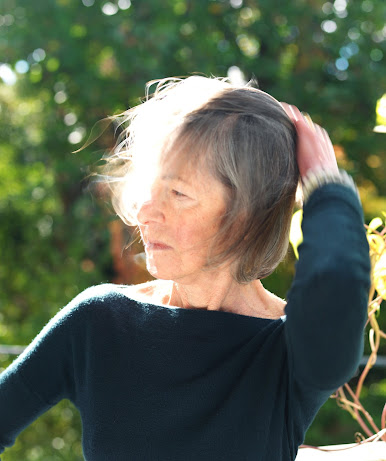 Louise Glück, pictured above, is an American poet who was recently awarded the Nobel Prize in Literature. Her name rhymes with "click." The picture comes from the October 10, 2020, edition of The New York Times, accompanying an article that reported on a conversation between Glück and Times' reporter Alexandra Alter.
Another article in the hard copy version of the same edition of The Times was titled, "A Poet Who Confronts the Monsters in Us." That article was written by Dwight Garner, book critic for The Times. As is so often the case, the headline you see if you click the link to Garner's article is not the same headline that appeared in the newsprint version. In Garner's article, Garner made a connection between Glück and Bob Dylan, the last American to win the Nobel Prize in Literature. Unacquainted with Glück, but definitely acquainted with Dylan, that comparison drew my attention:

I have argued, in these pages, that her 1990 book, “Ararat,” is the most brutal and sorrow-filled book of poetry published in the last 30 years. (It’s contained in her collection “Poems: 1962-2012.”) It’s confessional and a bit wild, I wrote, comparing it to Bob Dylan’s “Blood on the Tracks.”

Garner did not extend the comparison, as he wrote about Glück's poetry, so let me do so here, and with particular reference to Garner's thought that Glück is confronting our internal "monsters" in her writing. Here is how Garner puts it in his article:

One of the things to love about Glück’s poetry is that, while her work contains many emotional registers, she is not afraid to be cruel — she confronts the monsters in herself, and in others, not with resignation and therapeutic digression but with artery-nicking knives

The poet Kay Ryan, in her terrific new book of essays, “Synthesizing Gravity,” writes: “I think it’s good to admit what a wolfish thing art is; I trust writers who know they aren’t nice.” Glück’s work is replete with not-niceness. You would not, you sense, want her as an enemy.

I think that Dylan, too, is not always "nice" (and in this he and Glück are apparently similar). But... Dylan is always aiming to speak (and to confront) the truth, a predisposition quite properly associated with greatness in both literature and life.
Reading what Garner said, quoted above, I was immediately reminded of a line from "I Contain Multitudes," one of the songs on Bob Dylan's latest album, Rough And Rowdy Ways:
Greedy old wolf - I’ll show you my heart
But not all of it - only the hateful part
I’ll sell you down the river - I’ll put a price on your head
What more can I tell ya - I sleep with life and death in the same bed
I take these lyrics to be a claim that we must, if we are honest, all admit to the "wolf within us." Let us never forget, though, as Bob Dylan says, that this is just one thing about who we are. We have that "greedy old wolf" within, and we feed it, too. From time to time we feed its hate. We do have "monsters" inside. Yet... Dylan is telling us, when we look into our hearts, that there is something else present, too, something more than just "the hateful part." That, also, is what we know about ourselves.
We mix, within our souls, in the depths of our very being, both life and death. So, taking a hint from an early Bob Dylan song, let's remember "what the Bible told" (Deuteronomy 30:19):

I call heaven and earth as witnesses today against you, that I have set before you life and death, blessing and cursing; therefore choose life, that both you and your descendants may live.

In politics, in every way.... This is our possibility. Before us (and inside us) we find both life and death.  We sleep with life and death in the same bed. And we can choose.
Therefore.....
Therefore....
Choose life!
Image Credit:
https://www.nytimes.com/2020/10/08/books/louise-gluck-nobel-prize-literature.html